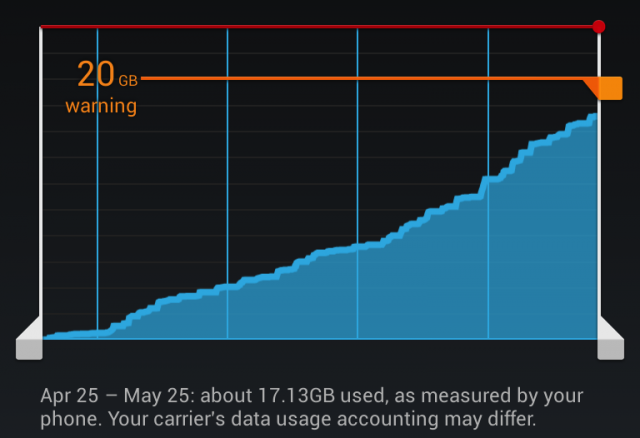 If you recently rooted your Android and installed the popular custom rom CyanogenMod 10, then you may have noticed a data usage problem. Specifically, users of CM10.1.0 RC3 are reporting excessive data usage when they check the Data Usage screen.

And when I say ‘excessive data usage’, I’m not talking about a few megabytes over your monthly limit. Apparently, users who usually use a few hundred megabytes a month checked their data screen to find a situation like the one shown above, where the phone reports up to 20GB of data used over the last month or so.

I don’t know about you, but as a Canadian, if I used 20GB of data per month on my data plan I’d probably have to declare bankruptcy. Unless you’re on an unlimited plan, that’s a lot of excess charges.

Breath in, breath out, and relax

The bug has been discovered and was linked back to a specific processor used by the CyanogenMod team to test the ROM. The team actually had a bit of a laugh about it in their Google+ post here.

You can fix the problem by downloading the latest version of CM, which is CM10.1.0 RC4. That release is stable and can be downloaded here.

That recent patch also fixes problems with wrong speeds in animations and “generally random behavior”, so it’s worth a download whether you’re worried about data usage or not.

But breathe out: your cell phone bill should be safe for this month.