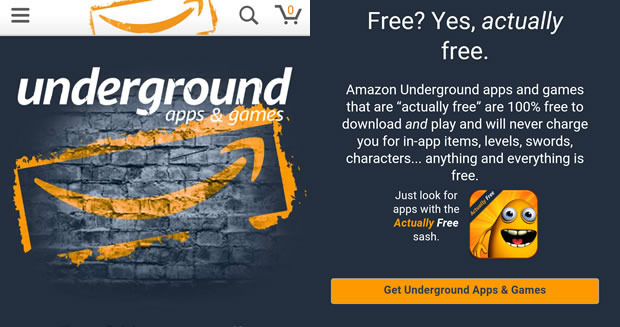 The announcement of a new app for Android by Amazon that will have all the stuff you expect in the usual Amazon app is indeed good news. You now have more games to play and try your skills on. Amazon Underground is the app and this may replace the existing Amazon Appstore, as it lets you download for free some of the premium apps.

Amazon has done a path breaking job in tying up with many developers and has paid them handsomely for them to make available many lovely games, apps as well as in-app items fre to users. Though many of these apps are paid ones, Amazon has figured out a way to compensate the developers of wonderful apps like the Frozen Free Fall, Angry Birds, Office Suite Professional 8 and many more.

Amazon has come out with a system wherein it will pay the developers of the apps depending on the usage duration of the app. It will maintain records of usage per minute and this approach has already worked with Kindle Unlimited subscription service where writers have been paid depending on how many of their pages have been read by users. The model is thus similar to music streaming sites services.

Other goodies on offer

Amazon remains committed to this endeavor

The good news is that this promotion by Amazon is not a one-off thing. They have indicated they will remain committed to it and that means Google has to be alert and aware that developers may shift from Play Store to this one. That will also mean many Android users may follow suit and that is why it is essential for Google to also keep its users engaged with something exciting to retain their loyalties.

The Underground is interesting from the perspective of providing genuinely free apps to its users. Though this concept is not a totally new one with both Apple and Google already doing it for their users, the fact that many have complained or felt irritated with the waiting time, upgrades for which they would have to pay, in-app purchases and the micro-transactions they have to suffer presents Amazon with a unique opportunity.  They can now prove they are different from both Apple and Google and possibly run away with many developers and users.