If you are one of the users using either a Nexus or Pixel device running Android Oreo, then you had most likely seen the notification saying, “[app name] is running in the background”. It may be useful but there are times when it can get quite annoying. Thankfully, there’s an app that could help you remedy these notifications permanently.

So why does this notification exist?

In other versions of Android, there really is no way of knowing whether an app is running in the background that’s doing some stuff it isn’t supposed to be doing. Cases like this usually wreak havoc on the device’s battery by keeping the system awake which is why these are called “wakelocks”. In other words, these are keeping the system from sleeping which isn’t good for your device. 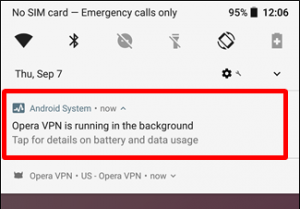 In Android Oreo, Google is calling out app developers that let their apps do this kind of thing with the notification. Basically, if an app is running in the background, it eats away what’s left of your battery.

Take note that there are other legitimate cases where an app continuously runs in the background, for instance, VPN service. However, in most cases, apps running in the background are just pretty insignificant.

So for users who get irritated or annoyed with superfluous notifications including the useful ones, wants nothing to do with all these notifications they are getting. Keep in mind that removing the notifications won’t do anything to solve the underlying issue. To solve it, you may have to adjust your settings or uninstall the app altogether. Anyways, this article will just help you figure out disabling the notification “Is Running in the Background”. And since this is a relatively crucial part of the system settings, there is no way for the system itself to get rid of it.

And yes, with the help of creative users, the developer community, there is now a way to remove it. A developer named iboalali was able to create an app called “Hide” which helps you hide the notification. Obviously the app’s name speaks for itself, which is about as straightforward as an app name could get. So before we proceed, you have to install it.

Right after a couple of taps, it’ll lead you to the Notification Acess menu where you can give the app permission. 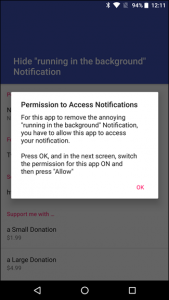 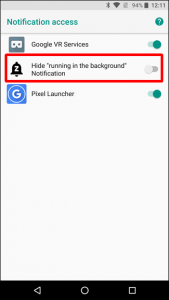 After you disable the “running in the background” notification, a warning will be displayed to give you additional information so just tap on Allow. 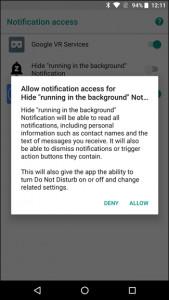 See? That’s all there is to it. From now on your notification panel is as clean as can be. And if you ever want to re-enable the notifications again, just open the “Hide” app and disable the Notification Access.