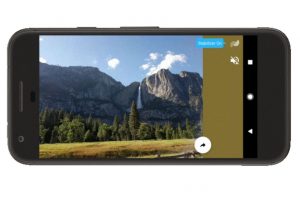 After a full year round being launched on iOS, Google’s Motion Stills app has  reached on Android — but in pretty much a completely a different form from that of the iOS.

Motion Stills on iOS is definitely popular; it is meant to make it an easy way to turn the iPhone’s Live Photos into shareable GIFs— and it’s pretty great success. But unluckily, Android doesn’t have Live Photos, so this Google’s new Motion Stills from is basically just a camera app that exports GIFs.

The app can basically take two different types of shots. First, which Google calls a “motion still,” which is somewhat like the Boomerang and Snapchat if you happen to be familiar with the two, that it is just or should at least three second video loop. It’s kind of confusing actually, because it seems like this is meant to be an alternative to Live Photos  where it even records the same length of footage, however, there’s no actually a photo involved. It is really weird, because the feature is called “motion still,” oddly there is only motion, and no still.

For the second type of shot, it is called a “fast forward,” and this one is a little more interesting than the first. It’s definitely a Google-made alternative to the Instagram’s Hyperlapse app, which has never been brought to Android so far. Just like the Hyperlapse, Google’s fast forward mode simply lets you record a video, and then automatically stabilizes that video and can even speed it up from twice to eight times the original speed. In a nice touch, you can keep modifying the fast forward speed even after the video is shot and saved, whereas  with the Instagram’s app, it only gives you one chance to choose a video’s speed.

Basically, this is far from the only option for taking hyperlapse-style shots on Android. Microsoft even released their version of the app called Microsoft Hyperlapse Mobile. Google’s option seems to work so fine and even well enough, though it took a minute for the app to process a video. On the other hand, its stabilization doesn’t look that great at lower speeds, either — though faster motion seems to hide the jumpiness.

It’s a little bit confusing as to why Google didn’t just make this into an alternative camera app that took Live Photos instead, then allow people who wanted them make it their default shooting app. As for its usefulness, many would  see that it can’t really be useful at all times, unless you wanted to make a hyperlapse. There are plenty of ways to make GIFs on mobile already and with so many other apps made it possible first — and others are way more fun. Google even has a bunch of more interesting creative options in Motion Stills on  the iOS, like an option to make cinemagraphs and add moving text, but neither of those made it to Android even up to now.