The bright side is Google’s new tool makes it easy to quickly verify that you haven’t installed a suspicious app into your phone.

When it comes to malicious apps, it don’t just lurk in computers. It also sneak in all other technically based piece of machines. I’m talking about gadgets such as tablets, smartwatches, and smartphones. Yes, you heard it right, malicious apps can also be inadvertently installed into your smartphones in a clever and deceptive marketing method. So always be careful of the apps you are installing. Protect your Android smartphones against all sort of malicious apps that might causes damages to your phones. Good thing there’s a new tool that aims to protect your device from suspicious apps.

Google’s Google Play Protect is the company’s newest tool aimed at helping Android users detect and stay clear of any suspicious and malicious apps. The service automatically scans your Android phone or tablet regularly and will alert you if there’s an issue spotted.

Bear in mind, that Play Protect is basically designed to scan and identify bad apps available in the Play Store, and not from third-party websites that host the apps. The easiest and the most reliable way to keep your device safe and protected is to install apps right from the Play Store, and the Play Store alone.

There are 3 different ways to check if an app is Play Protect approved or not. 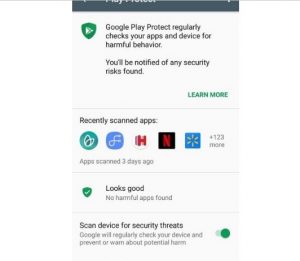 Make sure Play Protect is enabled in order for you to view the current scan status, go to Settings > Google > Security > Google Play Protect. A list of recently installed apps, current harmful apps and the option to toggle the service on or off will be shown.

Shortly after it was out, Play Protect became available to all users, but to some who opened the settings page and found the feature was actually disabled on the Samsung Galaxy S8. Due to some reason it is disabled in selective devices, and no one has the idea how or why it was turned off, while the rest of my test phones all had it enabled. It’s also a good idea to double check your phone as well.

On an app’s Play Store page 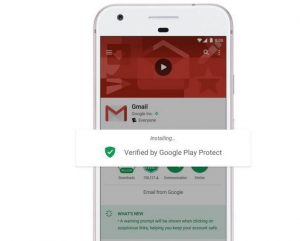 As Google completes the rollout of Play Protect, you’ll then begin to see verification badges on an app’s Play Store page. Indeed, this is a quick and easy way to check if an app that you installed is safe without having to wait to install it and then let Play Protect scan it.

Before you update your apps 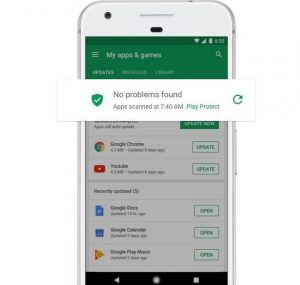 But just because an app is safe the first time it’s uploaded to the Play Store, it doesn’t mean that bad guys won’t try to sneak something into the app down the road. It would be safer if you always make sure to double check the apps safety.

Another good feature that’s coming as Google completes the roll out of Play Protect is a reassurance that all of the apps you’re about to update are still safe and usable.

Take note that you’ll find a “No problems found” alert with the last scan time at the top of the update list.