Some of the world’s worst Android viruses access your camera and microphone to secretly spy on you.

Now it seems like one of the world’s most popular video chat services is doing the same thing.

The latest update to the Android Skype app causes some weird problems. Users have been complaining about battery drain problems ever since Kit Kat was released. Google says that it’s not their fault and have now told users to try uninstalling Skype.

What’s wrong with Skype? The latest Skype update for the Nexus 5, Galaxy Note 3, and other devices appears to access the camera in the background. This causes major slowdown issues and high CPU usage – both of which severely drain battery life. 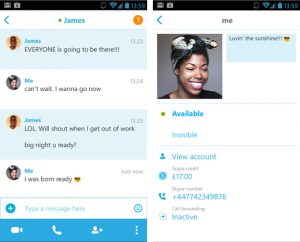 Google is now saying it’s aware of the issue and is working on a fix. However, in the meantime, it’s telling users to uninstall Skype to see if that fixes the issue. Google claims that Skype is actively using Android’s camera even when not actively running.

Google says that it’s possible other Android camera apps are causing the issue, but that “…most applications also do not access the camera when not in the foreground, so they will only trigger issues when actively used.” Skype, for whatever reason, uses the camera even when it’s not actively open.

But really, the worst part of this new update is the creepiness factor: have you ever noticed your phone’s performance slow down while you’re using it? Have you ever thought it’s because Skype is staring at you through your front-facing camera?

I’m getting chills on the back of my neck just thinking about it.

Of course, Google might have just issued the latest camera update to screw over Skype and promote its own video chat service, Google Hangouts, which is a direct competitor to Skype.