Have you ever seen a random person the street and thought, “I’d really like to see where that person went on her last vacation”?

Well, then you’ll like the new NameTag app, which scans peoples’ faces and searches for their facial information on dating sites and social media networks.

Along with scanning through social media sites, the NameTag app looks through the National Sex Offender Registry. That’s useful if you frequently date people you suspect to be sex offenders. It’s also a fun way to check if any of your friends look like sex offenders. 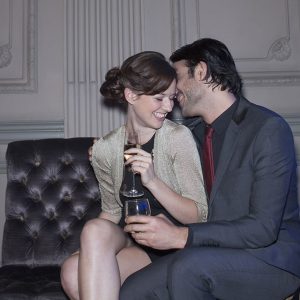 “Psst…let me take your picture”

All kidding aside, the app’s creator, Kevin Alan Tussy, says that his app was developed with safety in mind. It’s good to know a little more about the person you’re joining on a date. While you’re creeping their Facebook page, you can also check to see if you have any mutual hobbies or interests.

Maybe you won’t even have to talk to your date anymore!

Anyways, this app has set off a bit of controversy. People who like privacy don’t like this app, and sex offenders probably hate it too. Most criticism about NameTag uses words like “creepy” and “invasive”.

It’s not the first app of its kind (a Brazilian app called Boyfriend Tracker set off a similar controversy). But it’s certainly received more publicity than any other facial recognition app.

The app was designed for Google Glass and is currently still in development. Most people agree that adding software like this to Google Glass was what everybody was afraid of. How freaky would a train ride be if you saw someone with Google Glass checking you out?

Let’s be honest: you usually creep your date on Facebook or Google before you head out for dinner. This app just makes it a little easier. But good luck taking a discrete picture of your date’s face. It’s going to be awkward if you get caught:

“Hey hold still for a sec, I just gotta quickly run your name through a sex offender registry to make sure you’re cool.”

This is the future. You can learn more about NameTag here, although that site is currently down (due to all the recent media attention).