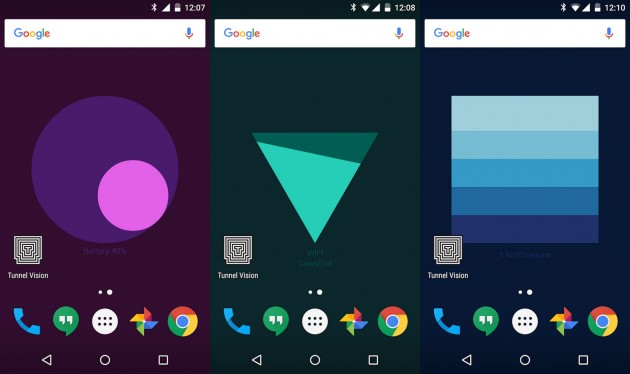 Here at OneClickRoot.com, we love customizing our phones (makes sense, right?). Our editorial team recently sat down and talked about our 5 favorite (and easiest) ways to customize our Android homescreens – and not all of these ways even require rooting or any technical expertise.

We’ll start with an easy one: live wallpapers are easy to install from the app store. They’re also notorious for worsening battery life. However, there are an increasing number of options that not only look great, but also have minimal impact on your battery.

Meter, which is Google’s official live wallpaper app, tends to be the favorite among Android users. It’s officially classified as a release from the Google Creative Lab (which includes beta products and test apps). Popular designs include geometric shapes and gradient color schemes that change when you tilt or move your device around.

Meter is available for free here.

To use any live wallpaper, just long-press anywhere on your Android homescreen, select Wallpapers, then pick your new favorite one from the list.

Your Android lock screen does a pretty good job of displaying relevant data. However, there are so many alternative lock screen apps out there that you deserve to try out at least a few of them – just to see if you can improve your phone.

These lock screen apps all bring something unique to your Android device. Some put all of your popular apps on the lock screen, for example.

Our personal favorite, however, is Microsoft’s under-appreciated Next Lock Screen app, which provides things like custom unlocks, extensive notification support, and apps and tools all directly from your lock screen. 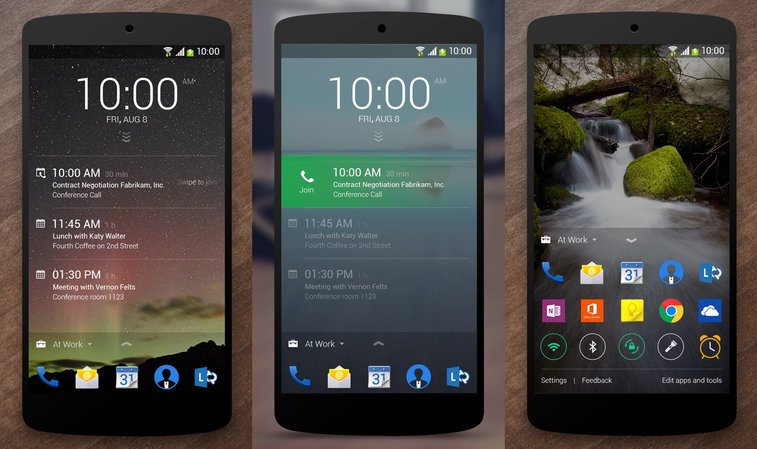 If you’re looking for an alternative lock screen app made by a reputable developer, then Microsoft’s Next Lock Screen is one popular option. Download it free today from here.

3) Make It Feel Like You Bought a Brand New Phone

Want to buy a brand new Android phone – but don’t have $800 sitting your pocket?

A few easy customization tweaks can quickly transform your Android to make it completely unrecognizable.

You don’t even have to do much to completely change the look and feel of your Android. Try installing an alternative launcher from the app store, for example. Themer is one popular option that goes far beyond what you’d expect from an average theme-changing Android app. Sure, it hasn’t been updated in a while – but it’s an easy way to completely transform the feel of your Android. 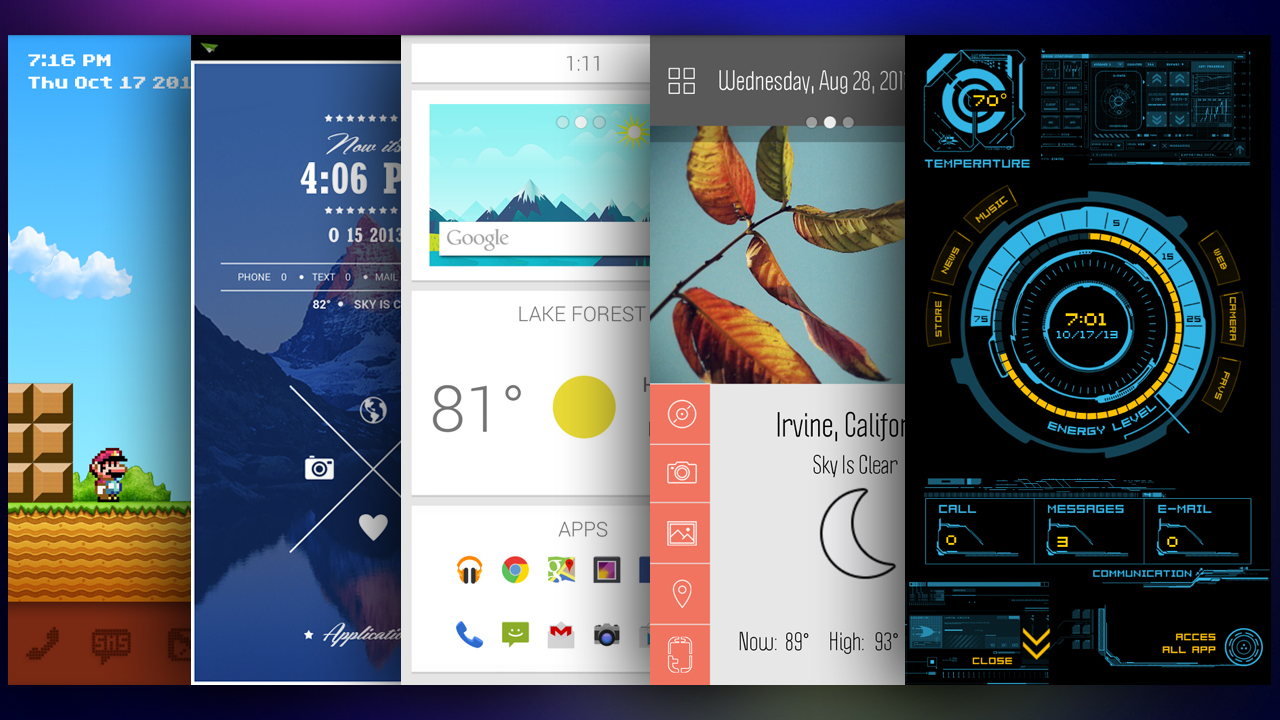 Other popular Android launchers include the no-nonsense Action Launcher 3, the popular Google Now Launcher (which makes your phone look like a Nexus), and the long-standing Nova Launcher.

To change your launcher after installing one of the options listed above, open Settings > Apps > cog icon > Home.

2) Change your Apps Throughout the Day

One of the most unique ways to customize your Android comes from Yahoo’s Aviate, which changes the arrangement of your app shortcuts and icons throughout the day.

In the morning, you might see weather apps and social media apps, for example, while in the afternoon after work, you might see Yelp and restaurant recommendation apps.

It works in a similar way to Google Now, but allows you to extensively customize how your apps appear throughout the day based on the time. 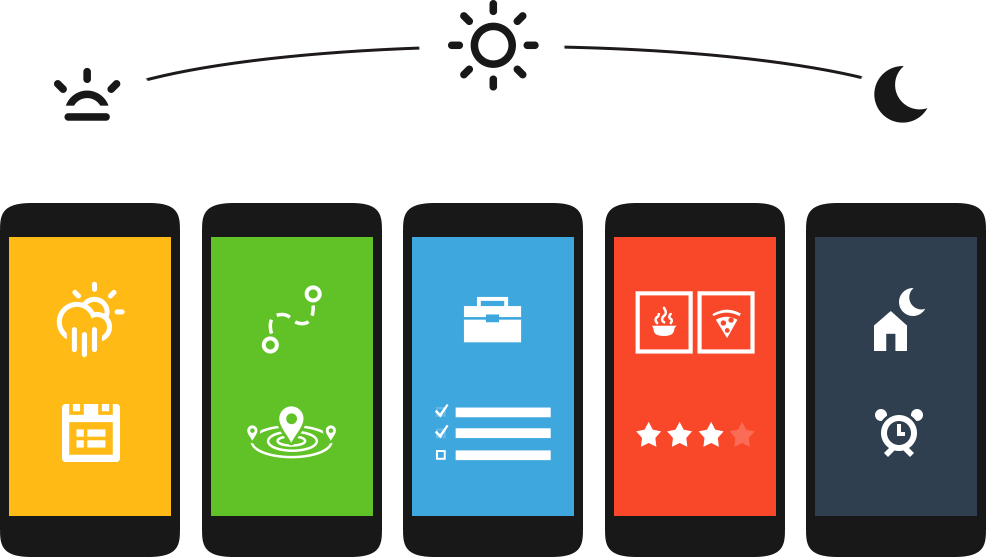 The app also comes with a bunch of surprisingly stylish wallpapers.

Anyways, if you’re sick of swiping between your app menus to find your productivity apps at work, and then doing the same thing to find your social media apps after work, then Aviate can be a life changer. Download it for free today from here: https://play.google.com/store/apps/details?id=com.tul.aviate

For years, widgets have been one major advantage Android users have had over Apple users (yes, I know iOS has widgets in the notifications screen now).

But many Android users are stuck using the boring old stock widgets that came with their device. The truth is, many leading apps have built-in widgets, and many other apps specialize in adding cool widgets to your phone.

To see the existing widgets available on your screen, long-press on a blank part of your home screen, then choose Widgets to see which ones you already have installed.

Google is particularly widget-friendly, and most Google apps have sleek widgets you can place on the home screen.

If you’re looking to add widgets that are particularly stylish, then LevelUp Studio’s Beautiful Widgets is one popular option among our editorial team and in the Android community in general.

Customizing your Android will always be easier after rooting. If you want to root your phone in the fastest, easiest way possible, then One Click Root is one easy download away. If our software can’t root your phone, you get a refund – or, talk to our famous world-class support team to have a remote root performed on your phone safely and effectively.