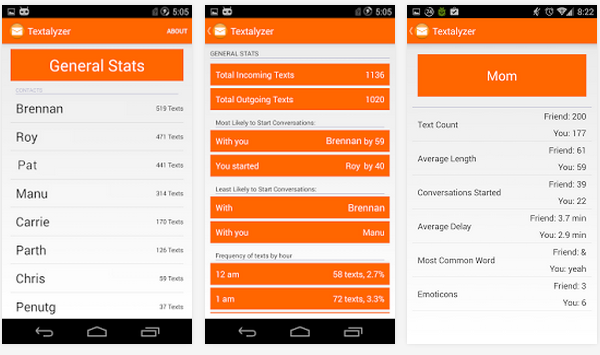 One of the cool parts about video games is that they keep track of your “stats”.

In Skyrim, you can see how many bunnies you’ve killed since you started playing, for example. In Grand Theft Auto, you can look at your total number of headshots.

An app called Textalyzer aims to bring those stats to your texts. 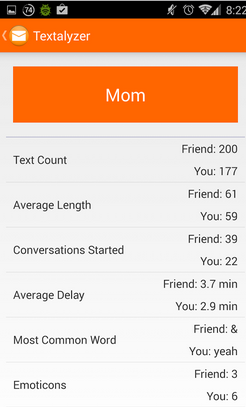 Textalyzer scans through your texts and analyzes a number of important stats. The app comes with the ability to analyze all of the following statistics:

-Number of texts sent and received from each contact

-Number of emoticons used in each conversation

-Number of times you or your friend started a conversation

-The most common word used in each text conversation

If Facebook or Google released this app, I would be wary – because it would probably mean they’re harvesting your texts for advertising or other nefarious purposes.

But this app does not harvest your information or store it in external servers. Instead, its only function is to perform calculations using data that is already on your phone. You don’t even need an internet connection.

It won’t work with WhatsApp (the WhatsApp API is closed with no public API). There are also reportedly problems with Galaxy Note devices.

Future updates may include more expansive features, like integration for third-party SMS apps, a graph view for the frequency of texts by hour, and many more cool features.

Not to be confused with Textalyzer

A few years ago, there was an app called “Textalyzer” that performed a totally different task than today’s Textalyzer. The old Textalyzer blocked you from texting certain contacts at certain times of the day or night. It was meant to help you avoid drunk ex texting.

Today’s Textalyzer doesn’t appear to be related to the Textalyzer of days past. So you can still drunkenly text your exes when using this app.

You can download Textalyzer for free from the Google Play Store.