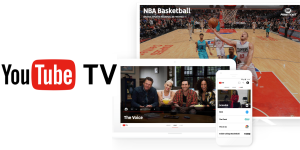 The logo of the YouTube has become one of the most integral as well as the most popular part of the digital world. This is the time to create the new room for the logo which is more modern and better. The YouTube TV is increasingly expanding to the cities and now it has actually hit a large number of devices. For the next few days, or probably this week, the subscription streaming TV service might launch the new application which is actually going to bring the broadband service of the TV to the Xbox video game system along with the Android TV devices. Within the coming week, the YouTube TV is going to be available on the Samsung, Sony, LG smart TVs and Apple TV as said by the YouTube TV product Manager this Monday.

One other most important upgrade which is already active is that the YouTube TV is going to respond to the voice commands especially when you are using the Google Home device while the streaming of the video over the Chromecast. After the launch of the service within the selected cities this April, the service is going to expand to the top 50 markets of television within the United States. This means that nearly two-thirds of the United States household are going to get their local broadcast signals on the TV of YouTube, as said by the product management director of YouTube TV. This new streaming service is offering the free trial for one week which is nearly $35 monthly after this. The YouTube smart TV carries 50 channels including the ESPN, NBC, Fox, CBS and the ABC. Users of the TV will be able to watch all of these channels on their mobile phone devices whether they are iOS or the Android.

These services are coming up with the use of a large number of bigger screen options. Just like the video gaming system, the TV of YouTube is also going to be available over the One S, Xbox, Xbox One and the new upcoming Xbox One X.

Along with the services of viewing the live TV, the subscribers are able to use the cloud DVR in order to record the shows and they can be easily watched later. The new update over the application as well as the addition of the devices connected to the TV is offering the real move of the YouTube TV to the living room as said by the YouTube TV product manager. This is completely intentional move with the idea to make things easy for the users and it is one of the biggest steps to install the access and the use of the service.

The launch of the YouTube TV over the Android devices and iOS are actually going to help the consumers in the idea that it can easily be taken anywhere. This is how the user will be able to do whatever they want and enjoy live TV on their phones.