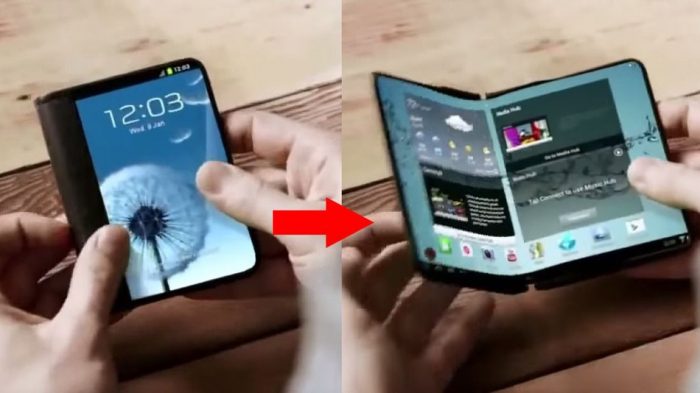 Looks like Samsung don’t want to silence the market at all. Now that the Samsung Developer Conference is over, the company is still aiming for the foldable phone hype to remain at its peak.

The company has leaked two new tiny bits of information today regarding the foldable phone and here they are.

The phone could be under the Galaxy F series

The South Korean company will possibly launch the phone under the Galaxy F series. That makes sense. If nothing else, “F” should stand for “foldable” or “fold”.

The company is planning to release the phone in March 2019, reports suggest. Rough testing for the new phone on LTE networks will be conducted in Korea by January. Although the testing has only been reported in Korea, the phone is expected to launch in many countries at the same time.

Reports also suggest that the phone will not be powered by a 5G network since not all countries are 5G-ready. Thus, the company is planning to release two variants of the foldable phone – one capable of 5G, and the other is up to 4G LTE only. However, the 4G LTE is expected to be launched first on March 2019 and the 5G-powered variant will be released by around the second half of 2019.

Samsung is set to manufacture over 1 million units of the foldable phone, and could even make more depending on the demand.

During the Samsung Developer Conference, it has unveiled the first details of the allegedly Samsung Galaxy F. The two screens will have a 4.5-inch 840×2152 outer display and 7.3-inch 1536×2152 inner display. It will also have a new UI called the “ONE UI” which is more circular in style, and can display three apps at once using the two screens.

It could be the most expensive Samsung phone ever

While the info above is a bit of interesting and exciting, you might want to sit down for this next information leaked. Since developing a foldable phone requires tremendous effort, new technology, and crazy demand, the Samsung Galaxy F might go out initially at a staggering estimate of US$1,770.

This is only a rough estimate and possibly for the 4G variant only. If true, expect the 5G variant to cost about US$2,000 more or less knowing that the feature costs more than 4G network. With these prices, the new Galaxy F could be one of the most, if not the most, expensive Samsung phone ever.

Royole CEO Dr. Bill Liu, the company behind the first foldable phone Royole FlexPai, already mentioned that a lot of new and different materials are needed to manufacture a foldable phone. And all these materials have to integrate into a thin display film.

I don’t even want to go far and explain how complicated the manufacturing process is. My only point is this is most certainly the reason why the estimated price goes sky high.

This is also why Samsung plans to limit the production of one million units only. The phone is great, but the high price ceiling could mean that it wouldn’t sell to the masses. A smart move for Samsung.