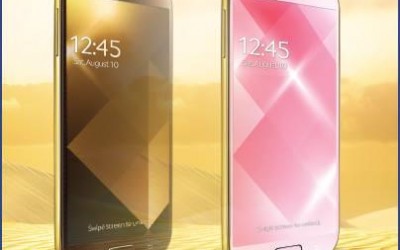 Apple blew the world away with its recently-revealed golden iPhone 5S. Just kidding.

Call it what you want to call it, but the golden iPhone 5S is outselling all other iPhone 5S colors. Over the past few weeks, Apple has sold over 9 million iPhone 5S and iPhone 5C units.

Those sales figures have caused other smartphone manufacturers to take note. Yes, it’s just a color change, and no, it’s not real gold. But for whatever reason, people sure like to buy the iPhone 5S in gold.

Samsung is one of those manufacturers that wants to follow in Apple’s footsteps – at least in terms of coloring. Samsung recently announced two new Samsung Galaxy S4 colors:

However, the golden GS4 models likely won’t be available around the world. Instead, they may only be available in the Arabian Peninsula, where the people obviously love their gold and their blatant signs of wealth.

Just like with the iPhone, there will be absolutely no difference between the Gold Pink S4, the Gold Brown S4, or any other S4 made to date. It comes with the following specs:

If you want an easy way to show people that you’re rich enough to buy a phone, but not wealthy enough to own real gold, then you should be able to order a Galaxy S4 online in the near future.