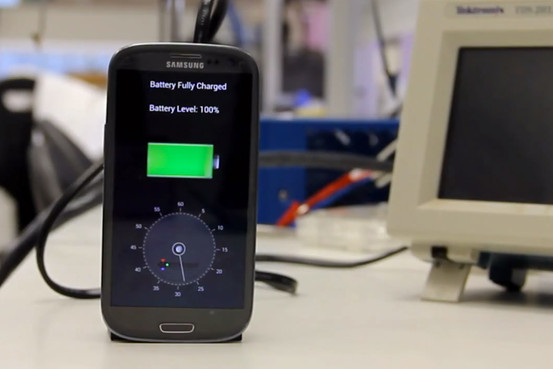 Waiting 3 hours for your phone to charge is annoying, but it’s an annoyance we’ve all come to accept.

There’s simply no alternative: you can either charge your phone or leave the house with a half-dead battery.

In the future, people will look back at our time and laugh because they’ll be able to charge their electronics in as little as 30 seconds.

The secret behind that technology is Nanodot bio-organic nanocrystals made by a company called StoreDot. What do any of those words mean? Let’s find out.

StoreDot is an Israeli company which recently demonstrated its Nanodot technology at the Microsoft Think Next Conference in Tel Aviv. This technology uses “bio-organic peptide molecules that change the rules of mobile device capabilities.”

If you cut out a lot of scientific jargon and incomprehensible technical terms, you get this: you could be able to fully charge your phone in 30 seconds by 2016.

Oh, and did I mention there’s a video of this in action?

What! How amazing is that?

There are some things to note about the Store-Dot technology. First, the current prototype is about as large as a laptop charger, which isn’t really practical for traveling. I’m sure it’s also very expensive to make.

However, over the next few years, StoreDot will work to reduce the size of the charger as well as its price. Eventually, the charger is expected to cost about twice as much as an average phone charger (around $60), which is a lot less than I would expect to pay for something as cool and useful as this thing.

The device is expected to enter mass production for consumers in late 2016, so we’re still a couple years away. However, in a mobile world that has constantly struggled with battery life innovations, this could be an important turning point.