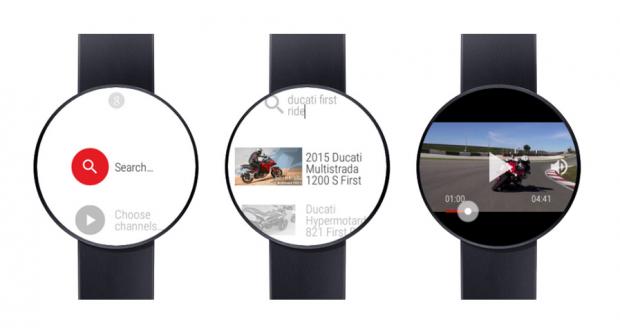 Android Wear has appealed to many users but still is unable to grow in sales volumes to the extent it may have expected to. One of the reasons for this disappointing turnout may have been the absence or inability to watch videos on it. Today, the empowered Android user wants his device to have everything going for him and many may have postponed their decision of buying a smart watch due to this feature not being available.

Now we have the good news that you would be able to watch the videos you want on your Android Wear. The app that will make it possible would be Videos for Android Wear and You Tube. Just open this app manually or through a voice command and search for your videos again through voice. You will immediately get the results that you can scroll and select to play the videos.

What about the sound then? As of now, your Android Wear is not equipped with speakers. That problem has been solved with the enabling of casting to Chromecast or any Android TV device. You can also connect the A2DP Bluetooth headphone or speaker to your Android Wear and enjoy the video on the circular screen at 16:9 resolutions.

Truly, if people now start watching videos on their wrist watch, it is going to defeat the purpose for which the Android Wear was initially conceived. Something similar was expressed when the smart phone with its screen size at 4.5 inches and above was launched and people started viewing videos on it. But the fact is video streaming with great sound quality is being enjoyed on such smart phones and video viewing on Android Wear too is going to follow likewise.

Now that the issue of sound has been solved, there is no stopping anybody who may wish to seek entertainment out of his wrist watch and not use it only to see time. Any Bluetooth headphone or speakers can be connected to the watch to enjoy any clip now. Chromecast support has been added to make it very simple to watch You Tube on a bigger screen if your watch is not near you or you are just too lethargic to use it.

The app is free and can be downloaded from the Google Play Store. The developer appfour is clear that it is compatible with all of the Android Wear gadgets. Do you see the advantage and do you feel like giving it a try then?

You Tube set the ball rolling

This development has its antecedents in the launch of the 60fps video for desktops by You Tube some months back. Now you can watch 60fps videos using the iOS as well as Android apps. Google brought this feature on the mobile and now the 60fps You Tube feature can be enjoyed on desktops, the Play Station 3 and Apple TV.

Though 60fps may seem to be an overkill as many do not want more than 30 or even 24fps, gamers will like this and that is why you can see a number of game videos on Your Tube conforming to the 60fps experience.