Since Android is the world’s most popular mobile operating system, it makes sense that hackers are targeting the OS in increasingly larger numbers. But should you be worried about the latest security threats plaguing every type of Android operating system? 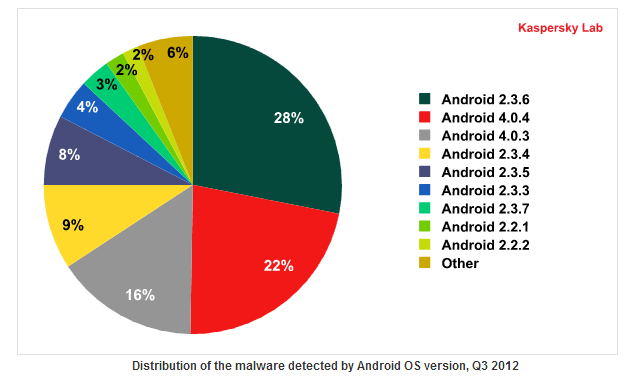 Above are the results of that study. As you can see, the most commonly targeted version of Android is Android 2.3.6, better known as Gingerbread. 28% of malware targeted the latest version of Gingerbread, an operating system which hasn’t been updated since November 2011.

The next closest malware infection rate was Android 4.0.4, Ice Cream Sandwich, where 22% of attacks were targeted. That might not seem like a lot, until you account for the fact that Kaspersky separated Ice Cream Sandwich into 4.0.4 and 4.0.3, with a further 16% of attacks targeted at 4.0.3.

In other words, Ice Cream Sandwich as a whole attracted 38% of malware – an overwhelming majority when compared to other versions of the operating system. Furthermore, Ice Cream Sandwich is only installed on 25.8% of Android devices, which makes its 38% share of the malware load disproportionate. 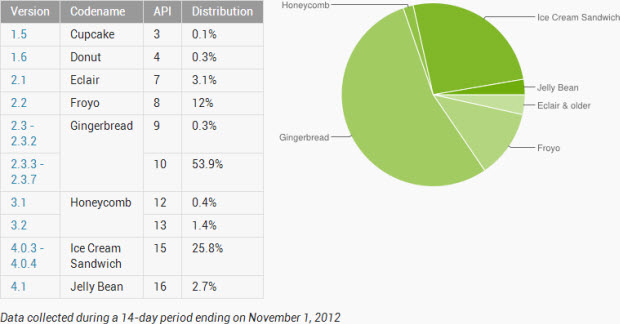 Meanwhile, Gingerbread is installed on 54.6% of devices, so its 52% share of the malware load (across all versions) is more reasonable. Earlier versions of Android attracted the remaining 10% of malware, including versions 2.2.1, 2.2.2, and others.

Instead of simply listing which Android operating systems are most afflicted by malware problems and then wishing users ‘good luck!’, Kaspersky highlighted some of the most dangerous malware infections on Android. Most malware involved SMS subscription-type attacks, where the victim’s number is signed up for a text message list that charges premium rates for each delivered message. It doesn’t take long for the cost of premium text messages to add up, meaning some users discover hundreds or thousands of dollars’ worth of charges on their phone bill.

Another popular type of malware is called OpFake, which tricks users into thinking it’s a genuine version of the Opera Mini browser. After users install it, it can monitor all data transferred over the phone and infect users’ system with adware, viruses, and other security problems.

Similar Trojans belonged to the Plangton and FakeInst families, which are a common problem in app stores run by hackers. So, if you have recently downloaded a ‘free’ version of a premium app, then you might have infected your Android with Plangton or FakeInst, both of which weaken system security by posing as popular free premium apps.