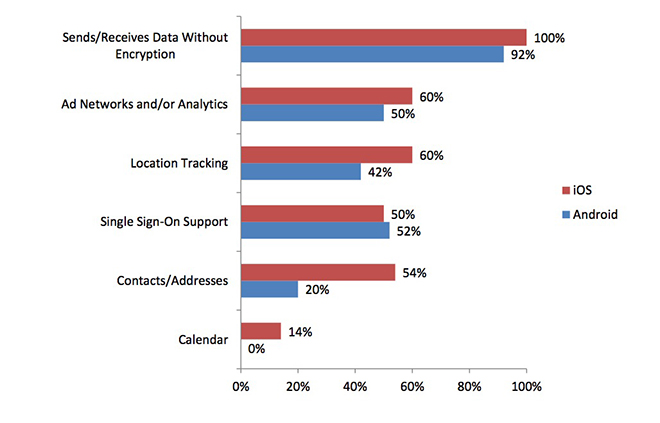 If Google has been able to enjoy a market share of over 80% with their Android OS, in the consumer segment, Apple has done equally well with their OS in the enterprise segment. Both giants have been trying to eat into each other’s strong markets with limited success. For the consumers, Apple is seen as an expensive proposition while the enterprise segment appears to trust Apple more for its robust architecture than the Android.

The question though is of security which is an important parameter for the enterprise segment. Enterprise accounts are won or lost not based on only pricing but various other factors with data security and redundancy management being critical among them. Recent reports of hacking of smart phones running on Android have not exactly boosted Android reputation. As it is, the enterprise segment perceives the Apple iOS to be much more robust and dependable and they have the figures to back that perception. A report that was released last year talked of only 0.7% of mobile malware directed at the iOS as opposed to the 79% that went after Android, assuming it to be more easy to break into.

Android Has Made Dramatic Strides

Google has been trying to correct this impression of the iOS being more robust by introducing many more safeguards and that has led to Apple loyalists like the Blackstone Group slowly but surely turning to Android for some of their requirements. They have observed that Samsung hardware and its integration with Android security features have enabled it to present an equally dependable system like Apple and at much lesser cost. It also means that enterprise customers would be willing to look at selected Android devices depending on the security integration the system is able to build in with its hardware OEMs.

Then you have the strides made by Google in native security through the encryption of data, boosted MDM support and even biometric authentication. The Kit Kat 4.4 for instance has much tighter access stipulations and controls that have been built along with scope for digital security warnings through certificates. They have also introduced the Elliptic Curve Cryptography and Samsung has gone a step further by providing their Samsung KNOX security on top of the Android OS.

Google has a problem in the sense it has to work with different hardware makers and manage APIs with each of them. Its success will depend on how quickly and efficiently it is able to manage this. If it is able to build sufficient controls and develop granularity with the APIs, it can garner more enterprise customers and make deep inroads into this segment.

Device Management System On The Way

Google is well on its way to provide a mobile device management system that will help users enforce strict security policies on their Android gadgets. It will be evaluating the various apps on the smart phones of users and those elements that are not desirable will be weeded out to make the system lighter and robust.