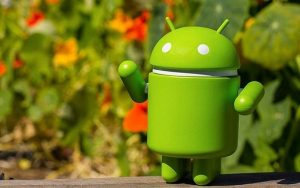 According to Google, Android Nougat is now on 15.8 percent of devices as recently published to the public. The latest Android distribution numbers of smartphone users who upgraded to Nougat continues to climb up the ladder making it finally past 10 percent of adoption back in July when it comes to adoption on user devices.

Marshmallow has increased as well, though just not as much as Nougat, and understandably so given that Oreo is now the newest version of software and will start making its way to more devices over the coming months with Nougat continuing to hit more devices too, and that means OEMs will likely stop focusing on Marshmallow now that it’s become a nearly two-year old piece of software.

Nougat has been increasing from being on 13.5 percent of devices to 15.8 percent. But still, Marshmallow is the most widely used version of Android, with Lollipop coming in behind it, which is at 28.8 percent of device adoption and putting it at what is still a pretty good lead above Nougat, the next to most current version of Google’s Android software.

With 15.1 percent of devices, Android KitKat now is moving down from an even 16 percent last month, while Lollipop moved down from 29.2 percent.

Moving down the line, Jelly Bean is still being used on 6.9 percent of devices which is a little bit lower than the 7.6 percent that it was at last month, while Ice Cream Sandwich moved down just a little bit from 0.7 percent to 0.6 percent.

Even Gingerbread is still being used on some devices, sitting at 0.6 percent as well, having moved down from 0.7 percent just like ICS.

What is noticeably absent from the distribution numbers is Android Oreo, which despite being on likely every Pixel and Pixel Xl at this point as well as some other devices, there probably isn’t enough devices running it for it to be placed on the list and make a dent, but it probably won’t be too long before that changes either as numerous devices, are set to be upgraded over the coming months. 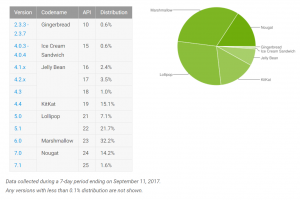