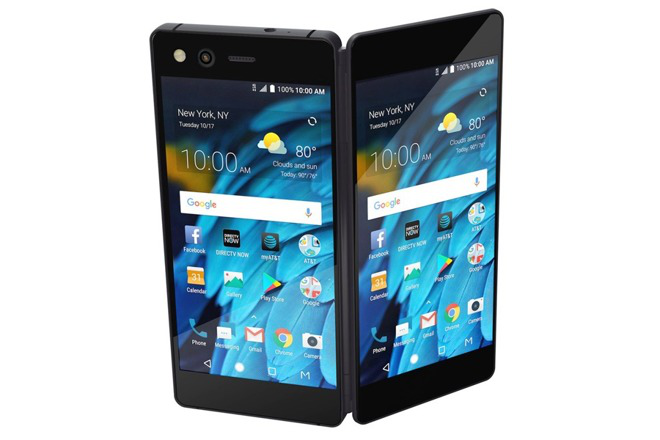 Android smartphone manufacturers are looking towards developing more foldable phones to offer consumers a larger display to compete against bigger handsets like the iPhone 8 Plus, a report claims, with a number of vendors said to be working on mobile devices using multiple screens to create a larger display area.

According to industry sources of DigiTimes, mobile manufacturers like Huawei, Oppo and Samsung are reportedly working on refining their plans for foldable smart phones. Other manufacturers are said to be following behind with their very own releases after the launch of ZTE’s Axon M Android smart phone in October this year and was believed that some of these manufacturers are close to launching their own foldable mobile devices.

ZTE’s new Axon M is an Android smart phone which uses two 5.2-inch of full HD displays as you can see on the illustration given above. The Axon M can be used unfolded to create a squarer 6.75-inch of display. And when you fold it in half, it turns the device into a conventional candy bar-style smart phone with only a single screen but its hinge and second display can be used in a mirror mode so that two people facing each other can watch whatever content is on the device.

Richard Yu, Huawei consumer business group CEO, has previously claimed that Huawei is working on its own dual screen service. This dual screen service is expected to be released before the end of 2018. While Oppo, another Chinese manufacturer, is said to have applied for patents related to foldable displays, according to the reports. On the other hand, Samsung has also allegedly applied for foldable smart phone patents in the United States wichi was reported by ET News way back in April and is said to have worked on dual-screen smart phone prototypes this 2017. In addition, Samsung also started the pilot productions of a mobile device with up to 3,000 units which are produced solely for testing purposes. This South Korean electronics giant have used its dual screen device testing in an announcement which seems to attempt in diverting the attention from iPhone X and iPhone 8 devices in September. And with regards to that announcement, Samsung also claimed that it was hoping to ship the Galaxy Note model with a foldable display next year.

Foldable mobile devices using two displays are not exactly a new concept entirely. It even has one early example which is a smart phone from 2011 called the Kyocera Echo that connected a two 3.5-inch WVGA touchscreens together using a pivoting hinge.

Two screens in a smart phone definitely offers a number of benefits to users like the increase in multitasking by having apps on separate screens, a larger keyboard area as well as the ability to view any content on a larger screen. However, it isn’t without its flaws as this kind of device typically suffers from other issues like increased chance of faults which stems from its hinge mechanism and the small visible seam between the displays when watching a video.

There have been a number of demonstrations of flexible displays over the years – a technology that could be used eventually to develop a single contiguous screen in a folding mobile device. Samsung has been rumored to coming close in creating a commercial product way back in 2015. However, this has yet to be implemented in retail hardware.

Moreover, LG Display was also allegedly working on developing foldable displays and was linked to Apple in its endeavor and aims to commercialize it in the coming 2020. It is a big possibility that both Samsung and LG will be one of the first companies to provide foldable displays in mobile devices as they own and operate their very own display production lines, as the source proposed. On the other hand, Apple is apparently working with LG on this concept and it’s probable that the company will sit back and observe just how well technology works.