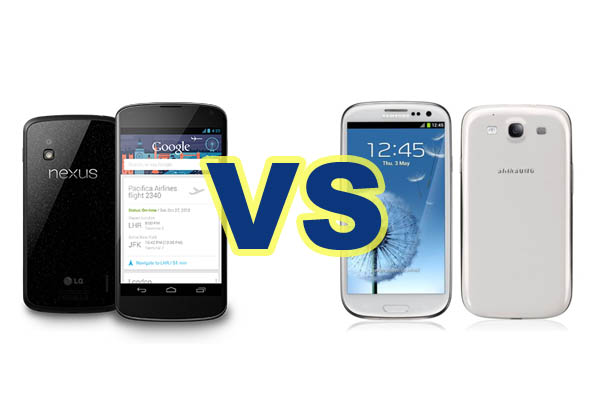 Google recently partnered with LG to release the Nexus 4, an Android smartphone that aims to impress with its large screen, slim design, and powerful processor.

This is one category where the Nexus 4 beats the Samsung Galaxy S3 cleanly. Although the Galaxy S3 isn’t too expensive, it generally sells for around $550 without a contract. Meanwhile, at the Google Play Store, the Nexus 4 costs just $300 for the 8GB model and $359 for the 16GB upgrade. Since the Nexus 4 is just about equal (or even superior) to the Galaxy S3 in other categories, this price difference is significant. 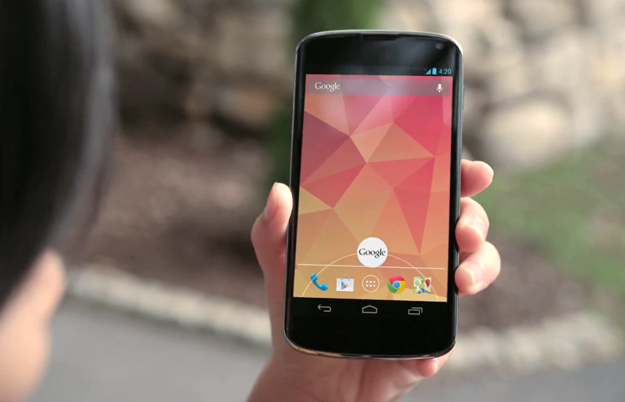 The Galaxy S3 is beloved by users for its gigantic screen. With 4.8 inches of AMOLED glory, the S3 is a joy to behold. However, the Nexus 4 is virtually equal in screen size to the S3. It features a 4.7-inch WXGA IPS display.

The Nexus 4 has a high pixel density than the S3 (it has more pixels per inch – ppi – than the S3). However, the difference between 320 ppi on the Nexus 4 and 306 ppi on the S3 is undetectable to the human eye, so this isn’t a huge advantage.

This category ultimately comes down to the type of colors you prefer. The WXGA IPS display will feature more life-like coloring, although the AMOLED sharpens colors and makes them appear more vibrant on screen. It might not be as ‘realistic’ as true coloring, although most users say that it looks better. With screen size and resolution being virtually equal, this category comes down to personal preference. 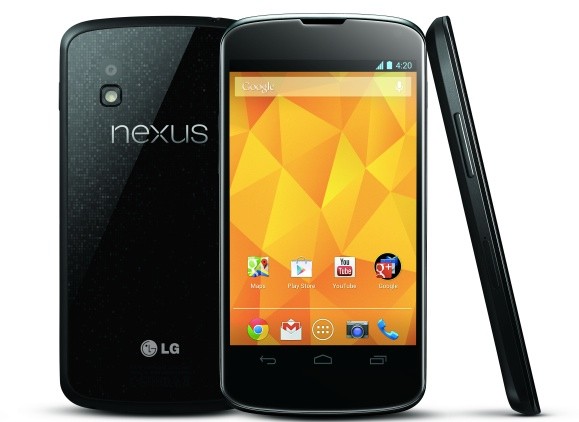 The Galaxy S3 has 1GB of RAM and a 1.4GHz quad-core CPU. The Nexus 4 also has a quad-core processor, although it’s clocked a tenth of a GHz higher at 1.5GHz. The real difference in processing power comes with the Nexus 4’s RAM supply: at 2GB, the Nexus 4 has twice as much RAM as the S3.

Since RAM is generally the biggest drawback when running large numbers of apps, the Nexus 4’s comparatively larger amount of RAM is sure to impress users. If you’re the kind of Android user who likes running multiple widgets and apps simultaneously, then the Nexus 4 will keep you supplied with the power you need. 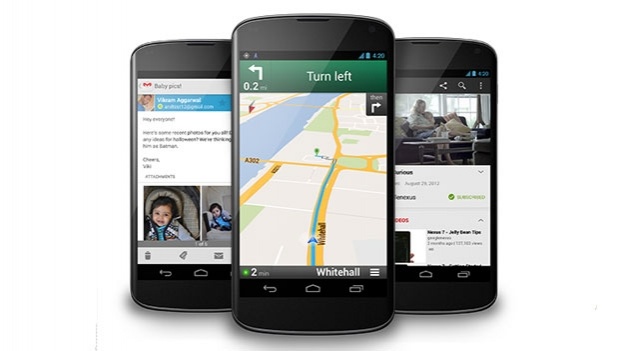 The ‘Nexus’ line is designed specifically for base Android. That means users get the ultimate Android experience. The Nexus 4 features full Maps, Chrome, YouTube, and Gmail functionality built-in, so if you’re a fan of Google’s services, then the Nexus 4 is one for you.

Obviously, the Samsung Galaxy S3 is also an Android-powered device, although it’s not the same version of Android found on the Nexus 4. Samsung tweaks its operating system and includes various Samsung services. Instead of using Chrome by default, for example, users have Samsung’s own browser. This can easily be switched, but in terms of offering a complete Android experience from day one, the Nexus 4 wins. 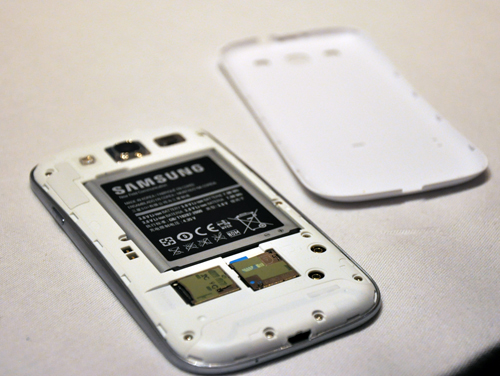 So far, this comparison has been skewed heavily in favor of the Nexus 4. However, in terms of storage space, it’s a no-contest victory for Samsung. The Nexus 4 comes in only 8GB and 16GB varieties. That’s not a lot of storage space to begin with, but to make matters worse, there is no option for expandable storage space – which means you can’t expand your storage with a microSD card.

Meanwhile the Galaxy S3 has 16GB, 32GB, and 64GB versions by default, and this storage space can be upgraded exponentially through the addition of a microSD card. So if you’re the kind of person who likes to store movies, music, games, and hundreds of apps on their smartphone, then the Nexus 4 might not be the phone for you. 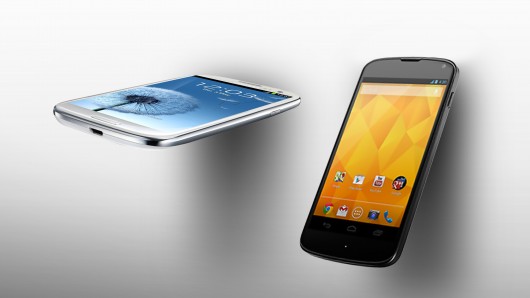 In terms of dimensions, both the Nexus 4 and the Galaxy S3 are fairly equal. The Galaxy S3 weighs six grams less than the Nexus 4 (133g versus 139g) and is half a millimeter thinner (8.6mm versus 9.1mm). However, it’s tough to notice this difference when comparing the two phones side by side, and each phone features a similar form factor. We’re going to have to call this category a tie. 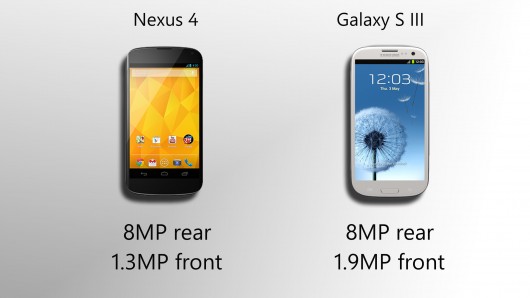 The Nexus 4 and the Galaxy S3 both have high-resolution front-facing cameras featuring 8MP quality and the ability to record 1080p video. But the front-facing camera on the S3 is of a slightly higher level of quality than that of the Nexus 4. The S3’s 1.9MP camera edges out the Nexus 4’s 1.3MP option.

The Samsung Galaxy S3 wins this category by a hair. 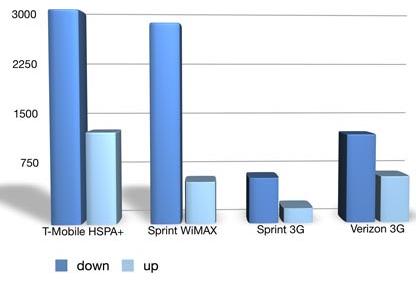 Those in big cities across North America (and other parts of the world) are already covered by 4G LTE networks. These blazing fast networks are faster than many Wi-Fi connections and allow vastly superior upload and download speeds when compared to 3G coverage.

But 4G LTE has been out for a little while, and even smaller cities in the United States are covered by LTE networks (particularly Verizon users). You would think the Nexus 4 would feature 4G LTE coverage, but it unfortunately does not. Users are restricted to 3G speeds, which is a major drawback.

For many users, this will be a deal-breaker, especially since the S3 comes with built-in 4G LTE coverage. If your cell service provider offers it in your area (which they probably will soon if they haven’t already), then 4G LTE is worth the upgrade.

Just how much faster is 4G LTE when compared with 3G? Well, 4G LTE can support download speeds of up to 100MBps, but most networks don’t have that capability as of yet. In general, 4G LTE offers speeds between 5Mbps to 12Mbps depending on the size, quality, and usage of your city’s network. Meanwhile, 3G speeds are generally capped around 3Mbps to 5Mbps. 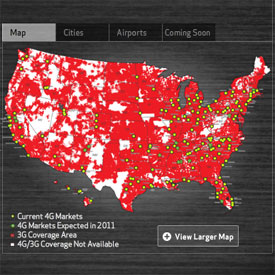 To put that speed difference in real terms, HD video will stream smoothly over 4G LTE coverage while 3G users are forced to wait for it to load.

Aside from the 4G LTE versus 3G difference, both phones have Wi-Fi, GPS, NFC, and Bluetooth connectivity options.

Both phones have exactly the same battery life in terms of capabilities, although the battery usage of each phone can differ. The stated battery power is 7.8Wh (2100mAh) on both phones, and the exact battery life will change depending on what you use your phone for. Don’t expect much of a difference in this category either way. 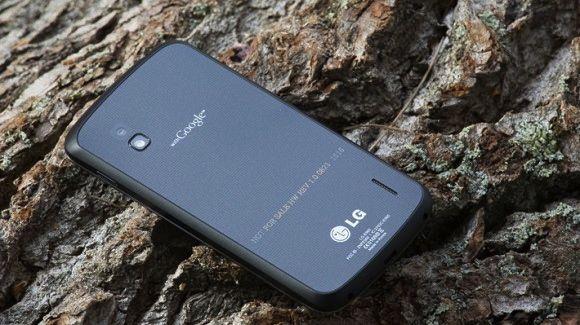 Ultimately, the Samsung Galaxy S3 and Nexus 4 are equal in just about every category but two: price and connectivity. Although the Nexus 4 is about two hundred dollars cheaper than the S3, it doesn’t have 4G LTE coverage. If 4G LTE coverage is important to you (say, if you spend a lot of time using data outside of Wi-Fi coverage), then this is a dealbreaker for the Nexus 4.

If, on the other hand, you want a rich Android experience complete with a high resolution screen and high-performance hardware, then there is nothing wrong with the Nexus 4 (provided you won’t miss 4G LTE coverage). If you’re looking for an affordable phone that packs a powerful punch, the Nexus 4 can be that phone.