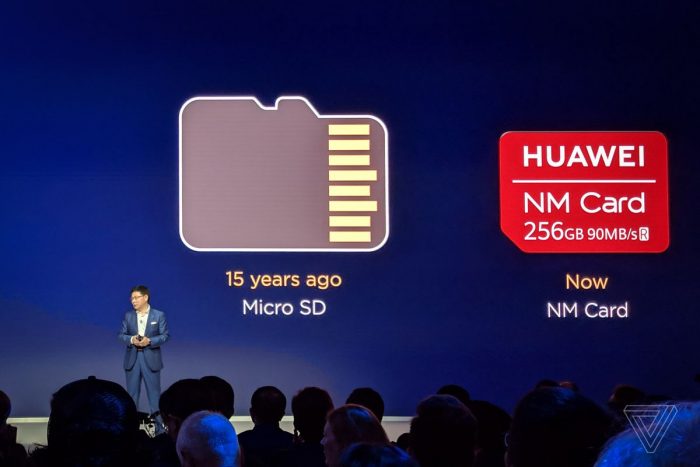 Huawei recently announced the Mate 20 and Mate 20 Pro will be loaded with new features. To our surprise, the company came up with a new storage card and called it the new standard NM cards or Nano Memory card.

Huawei Mate 20 and 20 Pro really seems determined to make this a new trend for memory cards. In fact, upon purchase of the new phone, the company is offering the buyer the choice between getting two NM cards or one SIM card and one NM card.

Huawei probably came up with the idea of decreasing the size for memory card slot to make smartphones easier to design and save some space – just a tiny bit, at least. According to the manufacturer, the NM card is 45 percent smaller than the MicroSD. However, the size is the only information they can leak for now.

As to what our eavesdropping ears were able to hear, the card is allegedly offering a speed of 90 MB/s and memory size of about 128GB and 256GB. Whether the company will release other sizes and speeds remain unknown.

As for the price, if we are going to take a wild guess, it should come way more expensive than the microSD. We know how technology works – the smaller the device, the higher the price. Besides, the same pricing result is expected when we base it on the law of supply and demand. Since the Huawei Mate 20 and 20 Pro are the only smartphones offering NM cards, with limited production with great demand, it should result in higher pricing.

Android phone fans have mixed opinions about the new Nano Memory cards. So far, the only difference it has against the familiar microSD card is the physical size. Plus, it’s harder to find when it slips off your fingers and land on a furry carpet.

Is this the future?

Apparently, this is always the trend in technology. Overtime, devices tend to get smaller. We can remember when there used to be bigger phone memory cards. Even the phone’s USB slot size is slowly shifting from microUSB to USB Type-C. I guess it’s only natural to embrace the change.

For now, it is still hard to say that Nano Memory has the potential to kick it off due to the limited information we have. But, it does have the possibility since other features who got smaller survive the market until today.

Who knows, the Nano Memory might just be the future of memory cards.

As we wait for more details, let’s just focus on how great the Huawei Mate 20 and 20 Pro are. It comes with an in-display fingerprint sensor and speedy face unlock, fast and reverse charging, a triple rear-camera, and running on Kirin 980 processor with dual NPU.