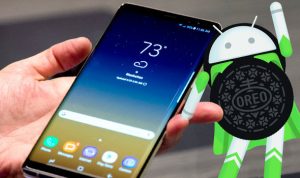 It has been confirmed by the Samsung Turkey that the Android Oreo is actually coming up with these phones and it has been revealed by the reports that the new Samsung phones especially the Samsung Galaxy S8 series and the Note 8 are going to get the sweetness of Oreo. But, it is still important to keep it in mind that no such official statement about the Android Oreo in the device has been given.
This is because of the reason that the Samsung Galaxy S8, S8+ as well as Note 8 are actually this year’s flagship phones and this is the reason that they carry higher chances among all the Samsung devices to get the Oreo update first in them. It has been confirmed that the Oreo update is going to roll out within the Samsung devices at the beginning of 2018.

There are also a large number of chances that the Samsung Galaxy S7 is going to get the update by Oreo along with the Note 8 and Samsung Galaxy S8. Along with such phones, it is not sure that whether the low budget or the middle range phones by the company such as C series or J series are going to try the sweetness of Oreo or not.

Samsung has actually started working on the Android Oreo pilot mode and it is aimed to release its update at the start of the New Year. With the help of the Oreo update, the Samsung phones are going to introduce a large number of new and exciting features. The best thing about the Oreo update is that it offers your applications to run more quickly at the faster pace. It shows clearly that the new Oreo update is definitely going to improve the performance of the phone. The new Samsung phones are going to get all the latest features of the Android Oreo such as the restriction over the background applications, notification channels, new emojis, picture within picture mode, predictive selection of text and the feature of Night mode.

Along with the Samsung, Google is also working with the other makers of Smartphone. The HTC has also confirmed that there are actually three of its devices, U11, HTC 10 and U Ultra that are going to get the features of Oreo with its update in November. The OnePlus 3 along with the 3T are also getting the update of software from confirmed sources.