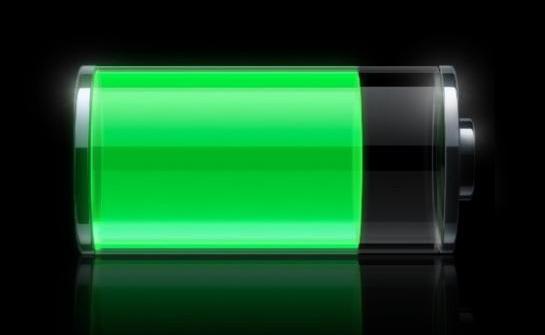 Apple has been facing a lot of criticism over the past year or so. Lackluster devices like the iPhone 5 and iPad Mini have indicated that innovation has dried up at the world’s most valuable company. And to make matters worse, more consumers appear to be realizing that Apple devices are more expensive and unwieldy compared to slick new Androids.

But Apple fans can rejoice because the iPad recently trounced its competition in a series of battery tests performed by a third-party organization. Those battery tests included some of the top Apple, Android, and Windows tablets available today.

Tests were performed by Which, a UK consumer watchdog site. During the tests, the tablets were set to equal brightness levels (200 nits, whatever that means) and went through a series of web browsing and video playback benchmarks.

And the iPad didn’t win by a slim margin, either. 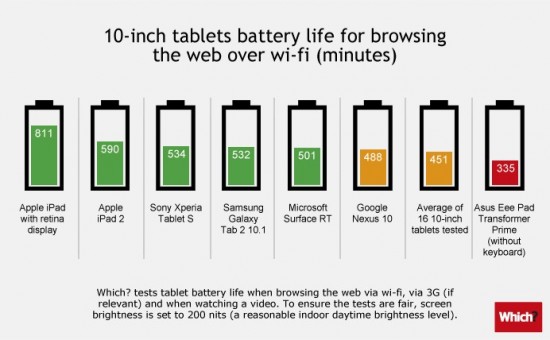 The iPad with Retina display lasted for 811 minutes (13.5 hours). The only tablet that can even come close to that level is another Apple product, the iPad 2, which clocked in at 590 minutes (9.8 hours). Finally, in third place, we see an Android tablet – the Sony Xperia Tablet S – which earned a respectable 534 minutes. The Galaxy Tab 2, Microsoft Surface, and Nexus 10 weren’t far behind, and all earned an “above average” rating compared to 16 other 10-inch tablets that were tested.

13.5 hours is a really long time. But the most impressive part is how conservative Apple is with its battery life estimates. On the official iPad sales page, Apple claims that the device can get “up to 10 hours of battery life.” 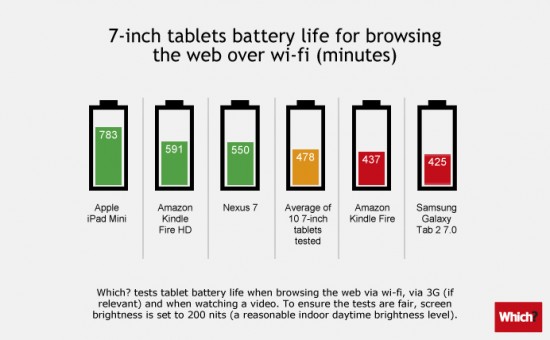 Aside from the iPad Mini’s victory, the most surprising part about the 7-inch tablet battery comparison is the fact that two supposedly top-tier tablets performed well below the average mark set by 10 other 7-inch tablets. Those two low-performing tablets were the Amazon Kindle Fire and Samsung Galaxy Tab 2 7.0.

Conclusion – should this affect your purchasing decision?

Of course this should affect your purchasing decision. If you want to buy a tablet that lasts for as long as possible, then the iPad Mini and iPad with Retina Display are simply your best choices. If two people were flying across the world using an iPad and an Android tablet, the person with the iPad would have three to four more hours of entertainment than the Android user.

Of course, battery life isn’t the only thing to consider when buying a new tablet. To get a better idea of how the iPad Mini stacks up against its top competitors, read our breakdown of the iPad Mini versus the Nexus 7