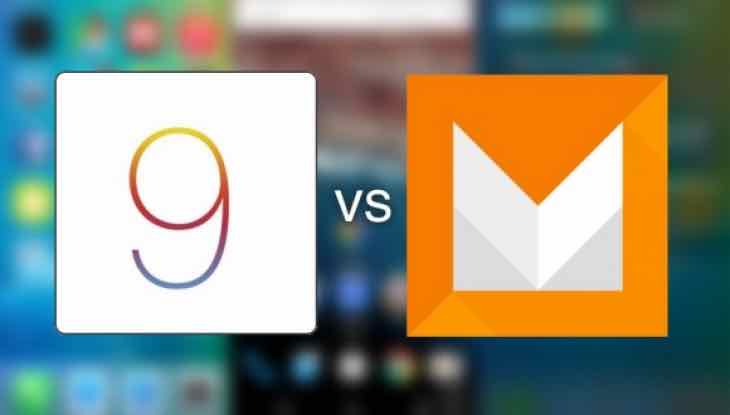 Within weeks of Google announcing its plans of launching the Android M, Apple has followed suit and has unveiled the iOS 9. Both these platforms are expected to roll out by Fall, though this timeline looks ambitious for the Android, given its fragmentation and other technical concerns.

So what will be the key differentiators between these two OS heavyweights? Let’s take a deeper look.

The first is the interface. Android M is likely to retain the same Lollipop interface apart from some tweaking of the app drawer and clock. The app drawer would be a vertical one and that is a refreshing change. Apple too is unlikely to tinker too much with the interface except for a different font style. The one major addition though is likely to be the “Intelligence” attribute of the OS where it will optimize features based on context and prior usage.

We now come to the Google Now versus the Siri voice-assistant technologies. Both can brag about their individual technologies. The Google Now on Tap is a very cool feature with its context-based suggestions output, where it will quickly grasp the context of the question you have posed to it depending on the app currently being used. It is very similar to the Siri in this regard and therefore both of them cannot claim to have any specific advantage over each other.

Privacy is one element that is going to be different in the Android M, thanks to the permissions system revision. Now apps will not ask for user medical data or intimate photos or the password but permissions will be asked for as and when required and you as the user can deny permissions as well. This might sound very similar to what has been in the iOS for some time now but it is good that Google has adopted the positive aspects and implemented it with the Android M. After all it is a better user experience that matters finally. Apple does not need to do anything with regard to privacy for the moment.

However, Apple does have an advantage and a point when it stressed it does not make use of data of users and stores it on the device itself. This is in sharp contrast to Google that makes use of consumer data for its advertising platform.

The Android M comes with better optimization for usage of power and there is also Doze, which is a novel feature to dramatically boost standby time. That is done by the motion detectors. When the phone is not in use, the consumption of the battery will reduce and when you combine this with the Standby feature that powers down activity of apps in the background when device is in the standby mode, the battery life is significantly bolstered. In addition, the USB-C support will enable quicker charging.

Apple has said that the iOS 9 will increase battery life by 1-3 hours depending on the mode used.

It looks like we are in for healthy competition and the winner will be the consumer who can now choose from two very good OS platforms.