Android is an excellent mobile operating system. But even the most die-hard Android fans will admit that our favorite mobile OS has one major problem: fragmentation.

Fragmentation refers to the fact that Google is rolling out Android 4.2 while many devices are still stuck with Android 4.0 Ice Cream Sandwich – or worse, Android 2.3. This means developers have trouble creating apps that are optimized for all types of Android devices.

It also means that Android users read about cool new features planned by Google, but they don’t actually get to use those features until months later. Since approximately 50% of Android users are still using Android 2.3, which debuted in 2010, fragmentation appears to be getting worse as time goes on. 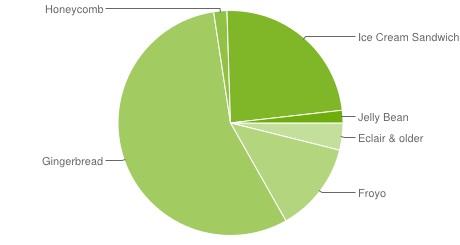 That clause (Section 3.4 of this document) reads:

“You agree that you will not take any actions that may cause or result in the fragmentation of Android, including but not limited to distributing, participating in the creation of, or promoting in any way a software development kit derived from the SDK.”

In other words, Android app developers are not allowed to contribute to fragmentation in any way. To make the clause update even more significant, those licensing terms and conditions haven’t really been changed since 2009, which is eons ago in the mobile world.

In the near future, look for Android to increase the pressure on manufacturers and carriers, since those are the ones who ultimately choose how quickly Android updates get released. And hopefully, in the not-so-distant future, we’ll all be using Android in perfect harmony.