I don’t know about you, but when I’m in a foreign country, I don’t like using phone data. If I’m lucky, my cell company charges $5 per MB when roaming outside of Canada. That means uploading a picture to Facebook costs about $12, and taking a cruise on Google Earth might force me to declare bankruptcy.

Well, Google finally heard the pleas of users like me and added an offline mode to Google Translate. A recent update allows Google Translate to decipher foreign text offline without communicating with its servers.

There is a catch: you’ll need to download offline language packs for any languages that you anticipate hearing in the foreign countries you’re visiting. And these language packs aren’t small. The German pack, for example, weighs in at 160MB. So be sure you’re connected to Wi-Fi when you start the download.

Once you’ve downloaded the required language packs, you can turn off your phone’s radio signals and test out Translate. You can type text in one language and read it in another, just like the online version of Translate. 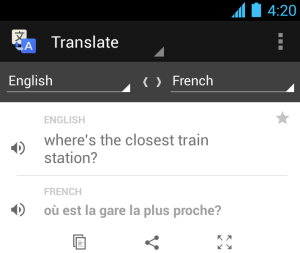 Slightly worse than the online version

The offline language packs are good, but they’re not quite as good as the online version of Google Translate, which is to be expected.

Why is that? Well, in the online version, users can rate the accuracy of certain phrases and submit alternatives, which gives Translate a crowdsourcing advantage. Offline, that’s not the case, and offline packs may be several weeks or months behind the online packs.

Take pictures of vertical Asian text to translate it

Google did more than just allow Translate to work offline. Google also added the ability to translate vertical Chinese, Japanese, or Korean text simply by taking a picture of it with your phone’s camera.

Unfortunately, this feature is not available offline, but it’s certainly useful if you’re trying to figure out how to type Chinese figures into your Android keyboard (don’t even bother). It’s also interesting to take a stroll through Chinatown and see if your phone can decipher what some of the signs say.