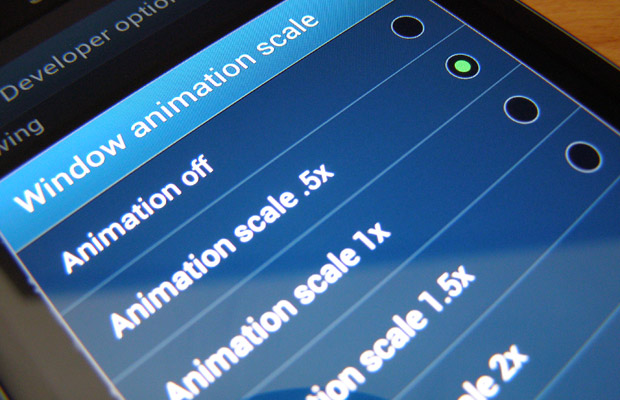 We’d all like a faster smartphone. Even if your Android is fresh, clean, and speedy, it always feels like it could be a little better in terms of performance.

Today, I’m going to show you three simple Android settings that will dramatically increase the performance of your device.

Those three settings affect the animation scale on Android, including the animations that play when you open a window, transition between windows, and perform other regular Android tasks.

Step 1) Go to your Settings > About Device > Tap Build number 7 times (Developer Options was hidden by default after the Android 4.3 update and that’s now the only way to access it on Android 4.3+ devices). After tapping on it 7 times, Developer Options should once again appear on your settings menu.

Step 2) Open Developer Options and scroll down until you see the following three settings:

By default, all three of the above settings are set to 1x speed. Cut that speed in half and set it to .5x to see if that improves Android performance.

In most cases, the performance improvement should be instantly noticeable. When you open an app, you no longer have to wait as long for the in-app screen to appear, and when transition between windows within an app, you’ll be moving blazing fast.

If you have noticed poor Android performance since a recent update, then this simple change should fix that problem and make your Android feel like a beautiful brand new phone once again.

Apple recently did this with iOS 7.1. They told users that iOS 7.1 would make their devices way faster. In reality, device speed wasn’t really increased, but the animation times were shortened, giving users the illusion of faster speed.

It’s easy to laugh at Apple users and say they fell for another elaborate marketing scheme by Apple, but if Android released an update that did the same thing, I’d fall for it too.