Link2SD is an application manager that makes it easy for Android 2.1+ users to move applications to the SD card, to clean all cache files of the apps. It enables you to manage your apps and storage easily. It also provides native app to SD (app2sd) features on Android 2.2 and higher. It can move any non-protected user apps to SD card (force move), with batch moving capability.

This feature uses Android’s standard SD-card installation feature and does not require a second partition. Cache cleaner function clears all your cache and free up space with a single tap. Also cache cleaner widget displays total cache size and enables “one tap cache cleaning” without opening the app. 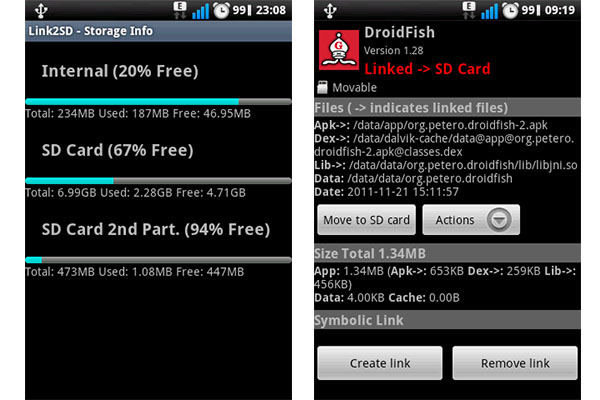 Link2SD has a crazy list of features that make the whole memory optimization process a joy to go through with. Here are some of the best ones:

There is also a plus version available with the following features:

To enjoy this amazing app, which supports over 40 languages, all you need is root access and a second partition on your SD card. Now say farewell to the days of you and your phone memory being enemies because Link2SD is here to bridge the gap between you and your beloved android smartphone!