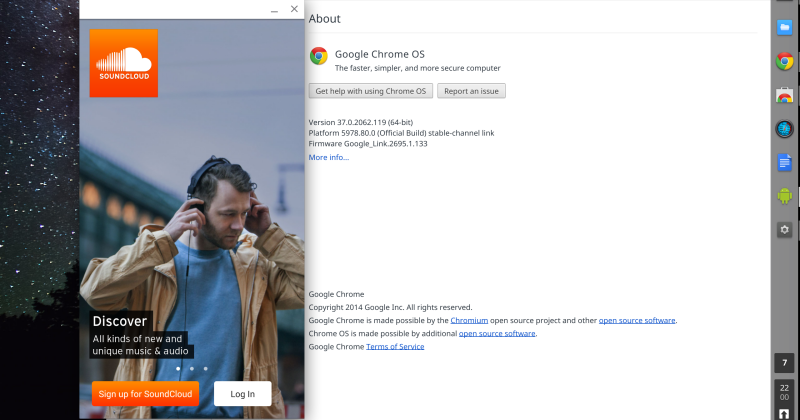 The increasing popularity of Android has as much to do with the huge number of apps as it has to with the ease of operation, affordability and bigger screen displays. Indeed, the number of apps available for free download from the Google Play Store have been a big draw with many users downloading some of the more popular games and enjoying the experience on their bigger Android smart phones. However, one lacuna has been the running or the lack of these apps on Google Chrome.

That lacuna has now been addressed with the release of the new tool that will enable the running of Android apps on the Chromebook. It was only last week that Google announced the Chromebook will support the running of 4 apps through just a code change. This tied in with the promise made by Google at the I/O in June this year.

Now that they have released the tool which is still under testing though, they have at least provided hope they would facilitate the running of more apps down the road. A definite date has not yet been given.

You Can Start Using The Tool

The tool is under testing and not yet available for everybody. But you can if you so desire, start using the tool if you are prepared to do some hard work and learn about it. You need to be prepared to install some more tools for that. Windows users, though will find it tough due to the tool already having been tested in a semi automatic manner on the Linux as well as Mac but has to be done manually on the Windows platform.

The first step is to check if the Chromebook can run the Android app. This can be done by installing any of the 4 official apps that are available. You cannot install more than 4 anyways as the Chrome-Apk will not create the Chrome OS app that you can then install. It only creates an extension and that too in developer mode. This will replace the Vine Android app each time you run any Android app. As soon as you run another app, the replacement of the Vine Android will occur again and this ensures you can only run one app at any one point of time.

But you will be able to run a maximum of 4 apps running if you are able to replace the 3 other apps like the Evernote, Sight Words and Duolingo. Theoretically, whenever Google releases other apps, you would be able to run them, but cannot do so if any of the Chrome-Apk apps are already installed on your device.

It is Currently Quite Complicated

It looks complicated to get it done this way, particularly when Google has promised more apps that they are going to be releasing in the near future. It also goes to show how resourceful developers can be to make the best of what is available. It also shows how flexible both Chrome OS and Android are.