To put it simply, this strange thing is called a silent notification. A silent notification is when a notification shows up with no visible icon or visual alert that lets you know it’s there. So what’s even its purpose if it doesn’t alert you? Well it still has a purpose but it’s not that important. It’s like passive information. It’s something that you can check any time you want to since it’s not even time sensitive and does not require much of your attention. 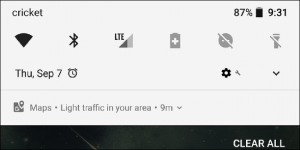 The same thing goes for your search queries. For example you’ve searched for an upcoming movie and whatnot, there’s a high chance that you’ll get a silent notification to inform you when that movie is released. And when you search for some information about some sports team you are a fan of, you can get a silent notification of game scores and all kinds of stuff related to it.

Although silent notifications only represent some passive information or non-important stuff that you could possibly want, it is still useful in some sense. It may be something you don’t want to know but it’s still something you need to know. And the best part is that with the new Android Oreo, you can turn any notification into a silent one as long as your device is running Android Oreo with full support.

As of now, there is no way to disable these silent notifications as they’re still an essential part of Android and since they are generated by different apps. The best thing that you can do for now is to long press the silent notification and then modify it on the app’s settings once you learn which one of the app triggered the notification.