Back in the day, CB radios were the best way to listen to what truckers and police officers were saying to one another across the airwaves. Today, it’s rare to find a CB radio in anybody’s house.

Fortunately, modern technology has come up with a far smaller and more convenient solution. It’s called Police Scanner 5-0, and it’s an Android app that allows you to monitor feeds of police scanners from all over the world – no matter where you’re currently located.

Using the app is incredibly easy. Just fire it up and choose from a list of supported countries. The United States offers the most online scanners, although the app also supports scanners from Canada, Australia, the UK, and others. 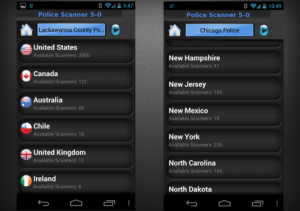 After selecting which country you want to listen to, you can choose specific feeds based on state, province, city, and other country-specific information. The app makes finding the feed you need as easy as possible.

Along with bringing police scanner feeds to users, Police Scanner 5-0 connects users with fire, rescue, and other radio feeds. The app is available over both 3G and WiFi, and it’s even smart enough to use your GPS location to find local emergency signals.

In most cases, the free version of an app is fairly similar to the ‘Pro’ version. Most Pro versions have a few extra features for which some users are willing to pay an extra $2. However, with Police Scanner 5-0, paying $1.99 for the Pro version is almost a necessity if you plan on using the app on a regular basis.

Why? Well, the free version of Police Scanner 5-0 cuts out every 30 seconds to remind you that you’re using a free app. In order to resume listening to the feed, you have to manually click a button. With the Pro version, there are no 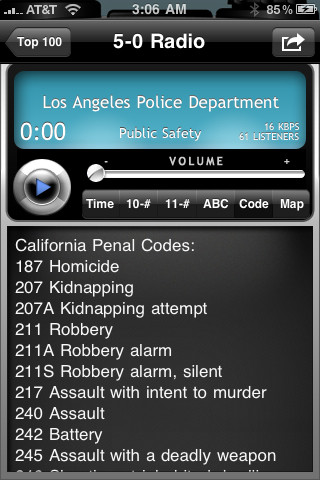 interruptions, which means you never have to miss out on an emergency situation currently underway in your city.

What can I do with this app?

-If you hear sirens in your neighborhood, you can find out where they’re going and what happened

-Report on events before the happen

-Access a glossary of dispatcher codes and other CB radio lingo

And one of the best parts about this app is its fantastic interface. The developers have put a lot of time into making Police Scanner 5-0 as accessible as possible, and this work has clearly paid off. Scanning through channels is also as easy as possible, and users will have no trouble listening to whatever they want to hear.

Whether you’re currently involved in a high speed pursuit with the police or you just want to hear what an Irish cop sounds like, you can download Police Scanner 5-0 today by clicking here.