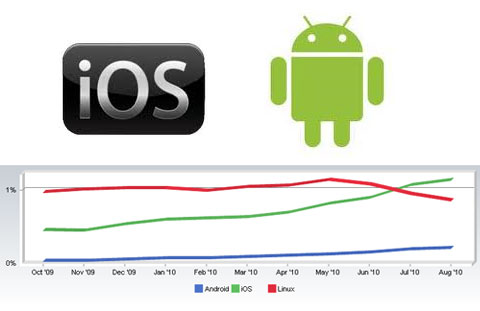 There have been plenty of news stories about Android’s dominance over the past year or so. The Samsung Galaxy S III has been outselling most Apple smartphones over the last few months, for example, and some studies peg Android market share at over 75% worldwide.

But in spite of those news stories about Android’s popularity, it still hasn’t nudged out Apple for top spot in the U.S. mobile marketplace. Fuelled by strong sales of the iPhone 5, Apple continued to maintain its grasp of the U.S. mobile market with a share of 48.1% compared to Android’s 46.7%, according to a recent poll by Kantar WorldPanel.

These numbers exist in sharp contrast to Apple adoption rates around the world. That same poll claimed that in Germany, Android accounts for a startling 73.9% of all smartphone sales, with an even higher number of 81.7% in Spain.

What’s the reason for this disparity between US sales and international sales? Kantar WorldPanel claimed that it was probably due to customer loyalty. American consumers were the first to jump on the iPhone bandwagon and many have never left. Apple users are also less inclined to switch to a new device, and the poll claimed that “an impressive 92% of existing Apple owners in the U.S. said they will choose an iPhone the next time they upgrade.” 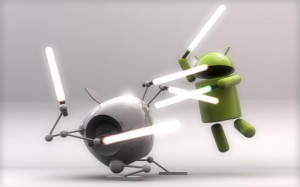 Android did hold a higher market share than the iPhone in the United States for a long period of time. That period was between the release of the iPhone 4 and the 4S. After the 4S was released, Apple maintained its lead – and continues to maintain its lead – to today.

Is it only a matter of time for Android?

Apple has one smartphone – the iPhone. If customers don’t like it, they can’t switch to a different model or try out an alternative phone. Only one company in the world manufactures smartphones running iOS, and that company is Apple. Meanwhile, there are dozens of different Android manufacturers.

Apple releases a new iPhone about once per year. Android manufacturers release anywhere from 5 to 10 new high-end smartphones per month.  No matter how good Apple is, they’re competing against a dozen top manufacturers, and it’s going to be difficult for them to maintain such a high market share as we move forward.

Whether you like Android or iPhone, it will be interesting to watch the two companies battle it out over the coming years. Watch for Android to take a higher market share as new devices like the Nexus 4, Note II, and Droid RAZR impress consumers around the world, but who knows what surprises Apple has in store for the iPhone 6?