The National Broadcasting Company has stepped up its game in the race for media supremacy by launching their official news app for mobile users. The Android world now has the privilege to get a taste of everything they need to know in the news world on one convenient platform – the NBC News app.

It’s all a question of preferred news and the kind of data and the speed at which it delivers data to you. This coupled with accountability and accuracy in the data and well-crafted news analysis is what majorly makes the decision on whether news apps are downloaded. 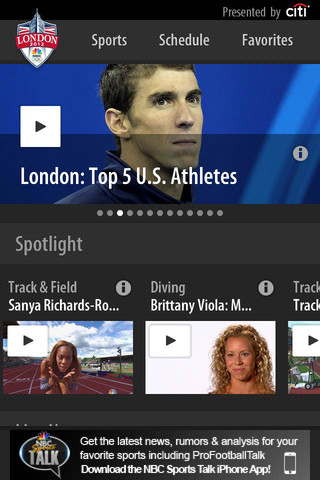 For those of you who have been ardent fans of the NBC news channel, you will certainly love this app as you see how well it is integrated to the news that is available to you on the TV and on the internet, and how well it is featured and streamlined for the convenience of mobile news readers.

The NBC News Android app is full of well-made news features all in line with the regular branding of the NBC channel, in the typical navy blue colour splashed all over the screen .

The NBC News app has multiple categories all which have been displayed thought the logo of the brand on the semi-circular petals, only here the petals in the flower shaped logo make a full circle with category names under it.

These categories range from:- 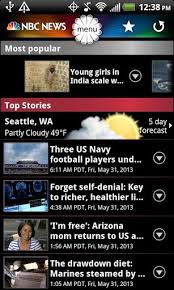 The above categories are accompanied by the shows which has a tab to be clicked on, after which the following shows land up on your Android screen:-

The shows and their associated reviews from the night can be seen all through the NBC News app right above. Once you enter into a particular category, the first thing you see is a video format of the news and analysis from the segment.

This is followed by a large list of news and reviews with the headline and a thumbnail image right next to it. Each of the shows have videos of multiple segments and can also have a twitter tab too to tweet about it and to see what story has been sparked in Twitter about the news release.

The menu button in the shape of a flower, like the logo lies up top to be accessed and the respective page can be marked a star for favourites and can be refreshed as well. On entering a particular news story, you can easily scroll between articles by swiping the screen to the right and this can easily be done across all sections.

Each news article also has embedded videos inside it if taken of course that can be played from within the article itself.

The NBC News app is compatible on both Android smartphones and tablets.

The NBC News app has been given 5 star ratings by over a quarter of a million users on Google Play Store, and it currently holds an incredible average user rating of 4.7 stars on the Android app store.

The NBC News app is available for free and is your key to the world of instant information and awareness on the digital space. So go ahead and give it a try. ABC News has its very own customised and IPR owned Android app and just like every other news publication, it has so much to offer that you’ll be stuck to your phones just exploring it. ABC news has been one of the few leading news sources for unbiased journalism in mainstream media.  It serves the information needs of readers early in the morning and late in the night with the same quality. bringing home the Android app for the world of smartphone users on this platform can exploit its news and reviews emanating from the broadcasting giant.

You will find the ABC News app incredibly user-friendly right off the bat even though it has a light learning curve attached to it once you start using it.

With a white background adorning your device screen as its basic interface, this app truly has something different in its looks and doesn’t have the overused time line look and feel to it.

The articles are in a line yes, but with only heading and many of them are from varying categories. You can see this by the indication to the left which will tell you from where it belongs.

The home screen will have for you the following categories to read the news from: The main categories available up top are the:

The ABC News Android app is well-crafted in terms of the interface and won’t play around much.

Once you like a particular section or a set of sections, you can literally arrange these section and categories so when you swipe across to switch categories they will appear in the format you would like it to. This would save time in multiple scrolling and frustrating you in the bargain.

The ABC News app also provides for personalised alerts in the form of reminders.

Let’s say you like a particular story and want to read more about it when there are proceedings in the matter, take for instance an on-going trial in the form of a lawsuit.

All you have to do is mark a start against the article and the next time there are advancements in the story the app will remind you when this happens.

Further, you also have a specially deemed inbox for the app. It will put in all the news that you have saved in addition to the reminders n terms of the star marked articles by you.

You can also access the Best reads section which is a compilation of the best news events from the day curated especially for you to read and not waste time on the other comparatively trivial stories,

The daily rewind feature will show you all what happened through the form of a video again with all the important happenings around the world. These videos will play and you can read in the background as the videos won’t take up the entire screen anymore.

The radio integrated into the ABC News app is updated every one hour with the top stories too and so if you’re too lazy to read, you know what alternative you have available for you.

With a 4.0 start rating in average, you can do better by using the ABC News app as your default news source and get a taste of the informational awesomeness people are talking about! Seldom have we seen an Android news app that is so good that you as not much a follower of the news actually would start to read it. Enter an app responsible for turning many and averse to the daily happenings into avid newsreaders of the 21st century bearing every bit of knowledge of the working universe around you – NewsHog; the app created by SoLoMob Inc. is an app exposing you to get set on a world of knowledge.

The interface of the NewsHog Android app is so easy to handle it will put the top most news rooms and aggregators to shame.

The NewsHog app has everything in it and the categories are in hundreds. These include the basic streams of news like:

Other than this, the news aggregator NewsHog is like a walking talking RSS inside your hand. NewsHog will also detect your exact location for you without you having to put in data into it separately.

Further to that, it looks like a newspaper in your hand with multiple articles designed to look like a newspaper and not a typical vertical line news summary that you see on conventional news apps.

The news summaries are also available to you in a tile layout and the typical grids to which you can choose from as per your convenience.

You can add in the location or the type of news that you want to see, for example the game from last night in the local sports category or the news from the election right across the other side of the world.

The aggregator has it all and is all updated in real time.

Further to this, the text-to-speech feature is another remarkably nifty service for you lazy ones or the extra busy ones who can’t cut in some time to read the newspaper. This feature can be used when you are in the middle of something but still want to listen to what’s going on.

The NewsHog app allows you to set an alarm so that you can wake up to your favorite news right at the top of the day.The NewsHog app is designed to adjust to the resolution and the size if the screen so you have no issues even when on a tablet.

NewsHog for the best user experience will give you a 100 word news summary at the beginning so you know what you are getting into.  You can also set a preset for you to enjoy only all what you want so that all the other un-important stuff is side-tracked and you get to read only what you want to. Additionally, NewsHog even allows you to download the articles for offline reading as well in case your internet crashes out.

You can also translate the default English content into a plethora of major languages spoken across the globe and directly share it across the social media world on Facebook and Twitter, Stumbleupon and email.

With a saving to ‘Pocket’ feature tagging along, this Android news app shapes up to be the total package and promises to never let you down. So for the best news collector in town, you know where to go!