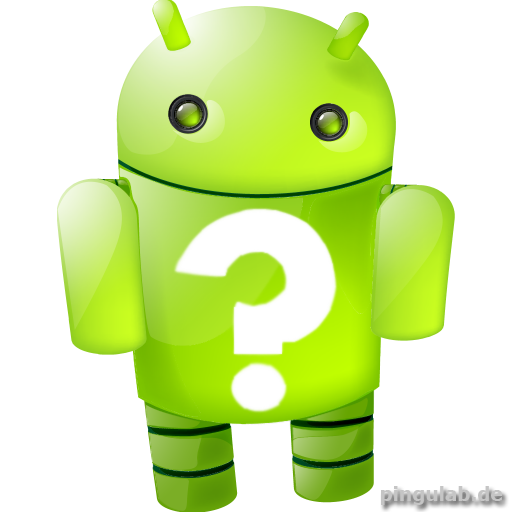 Here’s a game in the form of an Android app that’s more like a fun playing game with everything packed in for a good party or a gathering set of fun games. The fun that you’d have playing Taboo can be incorporated into the same game with tonnes of fun filled in to this simplistic game that is quite a visual treat to say the least about it.

Logo Quiz is a cute little quiz game that tests your knowledge of what all you know about the world around you.

You have to be observant and have to know a lot and have to have read and seen a lot to crack this game in particular and those of you who’ve seen and ventured out the most will find this game a breeze but won’t want to leave it till it’s completed to the very end.

What has been designed with extremely perfect graphics the game, is set to take you on a roller coaster ride of guessing. It will inspire you to delve into the depths of your brain to pull out the wackiest of answers in the most pressurizing of scenarios.

You have 4 major options within the Logo Quiz Android app that are:-

The game further come with 15 rounds that are essentially levels that sum up to more than 1000 logos to guess from.

All you need to do is know what logo belongs to what company and you’re good to go. There are no options though so you’re left pretty much hanging in the air with just the 26 alphabets at your disposal to make your choice and go ahead with.

The Logo Quiz app isn’t that hard on you either and starts with easy logos to detect ranging from Mc. Donald’s to Star Bucks, Walt Disney to Honda etc and would then move on to lesser known but famous brands like IKEA, Louis Vuitton, etc. and I you think it was still too easy, the app will eliminate a few letters or two or play around with the logo by extracting certain parts of the logo leaving you to guess what the name is.

Further to this, each level has a pre-defined number of logos to guess form and a certain number of correct guesses can take you to the next level.

As you hit the right name, a “Correct” sign will appear down on your screen along with the number of points you scored on it and a star to add in to the motivational fun.

You can also review each level and see where and how you where right and wrong as the logos will appear and it’ll have a tick or a cross or “not guessed” sign against it so that you know exactly how you fared.

The game is highly addictive and extremely fun to play for users who are out travelling or merely bored and need something to play. This game is also a hit at corporate parties to show who the real boss by unleashing all the knowledge stored inside you!

With a moderate 8.9 MB download size, this graphically rich quiz game is a must-have for Android educational app enthusiasts.

Here’s another one for all the music fans in the house. And not just any kind of music; it’s the kind of music that we all in some part of our lives grew up listening to – Pop Music. And for that matter there may be many of us who still do listen to at least a bit of this kind of music. And hey! It’s all right to do so considering we grew up with it, not letting go of it just like not letting go of your childhood is completely justified. So what’s this all about Pop stars and Android apps anyway?

Logo Quiz Guess Pop Icon is the app in contention, and it happens to be an oh-so-awesome way to spend your time in reminiscence of the past and in a way you’d enjoy and not mind spending your time. Spend your time looking for and guessing the pop star from a list of innumerable pop stars many of which you may have even listened to and detecting them may not be too tough.

The Logo Quiz Guess Pop Icon app is designed for you to guess the pop star who’s animated picture shows up and below this you have a list of letters of which some of them make the name of the pop star, Be it PSY od Britney, the animated image will get you scratching your head and thinking and finally give you the voila moment!

In addition to this, the app also allows you to look for famous people, pop-stars, hit movies & TV shows and popular characters to guess who and what they are.

This way you get to increase your knowledge through an app designed to get you thinking in a fun way!

The Logo Quiz Guess Pop Icon app supports over 300 different icons for you to guess from all of these which are spread over a category of 9 levels.

Now each of these levels has a higher difficulty level and to incentivise the app the developers have thrown in the hints.

These hints will allow you to make a better guess and further the incentive works in a way that it will help you get more and more of these for the next question as you keep giving the correct answer for each previous question.

Other than that, the app gives you 5 hints per question and you can use these to crack each question to make it to the next level.

The Logo Quiz Guess Pop Icon app at the end provides for detailed statistics which help you know what and where you went wrong in. I.e. which level gave you the maximum points and where you utilized the maximum number of hints.

Each of the levels of the game come with varying difficulty, and this gets you digging deeper into the roots of your brain even more.

With almost 14,000 5 start reviews which are more than 70% of the review ratings, this Android game has emerged with a powerful 4.5 star average rating on Google Play Store. It is the perfect mindbender that you will enjoy testing your pop culture savvy with.

Learning’s always fun! You get to flaunt what you learned and that’s quite a god way to feel good about yourself. The Android space luckily provides you with a huge list of apps that you can use so that you increase the size of that brain and hey! Who doesn’t want to know an extra thing or two? The app in play here serves an infamous way of testing your Geography-related knowledge.

Logo Quiz World Capital is a straightforward game for curiosity-driven folks who are intent on learning about various countries and testing their geographical awareness. It indirectly ensures that you know these places on the map well and at the same time know their corresponding capitals.

The game’s core design is rather simple and lets you do a lot of thinking so that you dive into the deepest corners of your brain and dig out what you once learned as a school/college kid.

The Logo Quiz World Capital app is a huge bundle of knowledge that has a database of the countries which tells you the GDP, Area, Population, Highest point etc. 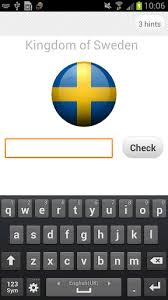 The idea of all of this is to ensure that you know the capitals of these places.

The logo bit comes into play, as you may have guessed by now, as the flags of these places are displayed. All the 192 countries in the General Assembly of the United Nations + the 4 that aren’t in it are a part of the app, where the name of the country is accompanied by the flag.

Below the flag then is the drop-down menu of all the other countries which you can choose from all of which are in alphabetical order.

All you have to do is type in the name of the capital of the place and you’re up by one whole point.

You also have a hint column to the side which will lead you to the core demographics and other data about the country in place so that you can make the perfect choice of the capital.

The Logo Quiz World Capital app kicks in a bit of competition when it compares your scores on a global level and makes sure you push yourself to make it to the best target so that you’re right at the top.

You can also compare your answers to your friends and challenge them to see who lands up scoring more than the other. 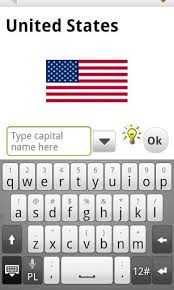 The Logo Quiz World Capital app is a mere 1.4 MB in size and doesn’t take much a load on your phone. Though the app is rated at a small 3.9, it does give back a few takeaways in terms of the learning and simple geography.

With an OS requirement of Android 2.1 and above, the Logo Quiz World Capital app is compatible on almost every Android device and works perfectly well on tablets and smart phones.