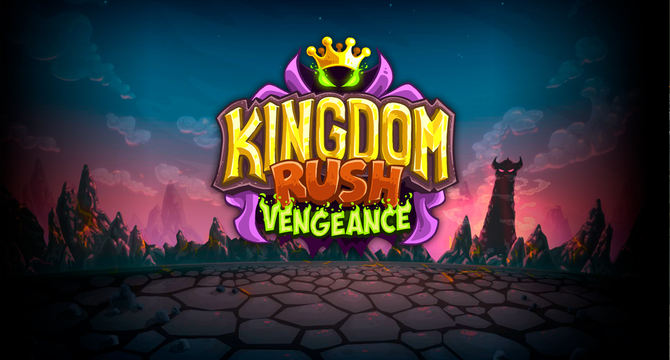 Typical games, typical story. The reason why players today easily get bored playing MMORPG and other RPG games is simply because they literally have the same story flow. Luckily, Ironhide Game Studio is willing to break the trend and thought, “Let’s turn the tables.”

Thus, the Android game Kingdom Rush: Vengeance was born. And the tables have indeed turned. This time, the player plays as the resurrected evil wizard Vez’nan who seeks revenge against the forces of good who once erased him from this world.

Here is our review of Kingdom Rush: Vengeance.

The game starts with a set of scenes showing the evil wizard Vez’nan’s resurrection. He returned to the world only to find out that his evil castle has been turned into an amusement park for silly dwarves and playful elves. This will immediately launch a campaign to reconquer his land and return it to its former glory, or gloom. He will then raise an army of orcs, demons, skeletons, and other villainous creatures.

The first stages are obviously pretty easy with only five to ten waves of enemies. It will increase into 15 waves with autosave every end of the 15th wave. However, that is the only autosave you’ll get per stage so make sure to survive until the 15th if you want to finish the difficult stages.

The game requires a lot of time though, for a mobile game. There are no shortcut buttons that will summon all the waves at once. You’ve got to be patient and wait. Additionally, there is no pause button between saves.

So, if you plan to play this game, do it during long idle hours. This is not the kind of game you play just to kill boredom for a few minutes.

Tower Defense with a twist

Kingdom Rush: Vengeance is like a tower defense game with a twist. Your hero will also act as a tower with special abilities, and you need to move him from different areas from time to time to slow down heavy enemy surges.

The game also requires intelligent tactics. Clever use of hero, items, and spells must be observed since enemy heroes might also appear and the forces of good will attack your defenses on random intervals.

As you progress into the game, you will be able to unlock three heroes that are part of the main story. There are other six heroes that are unlockable only via in-game purchase. Each hero has a unique set of skills including a powerful ultimate skill.

Towers are also unique and will change their abilities as you progress through the game. There are a lot of towers to choose from, but you can only select five to take with you in every level. There are 11 towers you can use for free, and five towers available only via in-game purchases.

The game is free to play and you don’t necessarily need to purchase the additional towers and heroes behind the paywall to finish the game. But it has its advantages. These in-game purchases may range from $3 to $8.

You can now download Kingdom Rush: Vengeance on the Google Play Store and play it for free.