Haven’t we all had times where we’ve found ourselves in the midst of a very boring meeting we’d want out of or an annoying relative who just went of chattering nineteen to the dozen and wouldn’t keep mum? Wouldn’t it be better to have a miraculous intervention in the form of a distraction to help you tune out of your zombified courteousness.

Well, for those of you seeking instant liberation from awkward encounters and boring meetings at the tap of a button, the mighty cool Fake Call Me Pro app for Android will serve that purpose superbly. The core functionality of this app involves the user being able to summon a decoy fake call on his Android device in order to excuse him from the situation pretending it is a real call. So let’s get you familiar with the key features of the Fake Call Me Pro app. 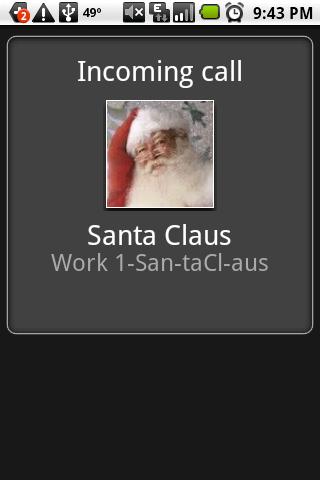 This is a very highly ranked fake caller Android app that has features designed to bring you out of situations with customized voices and in-built voices of celebrities and fictional characters. The pro version is the paid app but the app is also available in the free version. 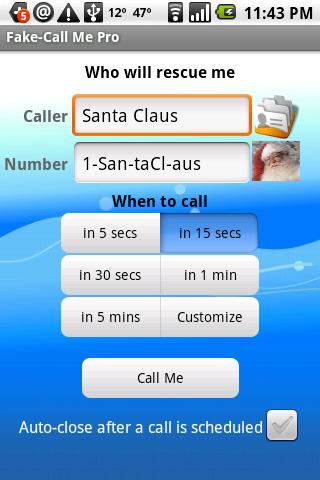 On downloading the Fake Call Me Pro app, it is saved as FCM so that no one else knows that you have used this feature.

On opening the Fake Call Me Pro app, the user is asked who he/she wants to receive the call from.

The user can mention the time after which he wants to receive the call and it works just perfectly.

This app also has an inbuilt season app where you can have Santa-Claus call you and speak to you.

You can also have Barack Obama call you during voting season, say when you’re in line to go vote for your candidate.

Scare your friends with scripted fake calls that have voices to freak them out.

You can also use this app as an alarm by fake calling yourself to wake you up in the mornings.

Fake Call me also supports in-call voice features which has people talking on the other side of the phone while in the fake call.

These people include stranger voice-overs and voices of friends as well.

There are several in-call customized voices too. Those can be pre-recorded voices of friends or could be additional voices provided by the app itself.

The user can also use audio files from the device or the SD card for the in-call voice feature.

All of the above features fused make for a perfect escape.

To make the app even more authentic there is a feature that caters to those excessively nosy people as well. That’s right, the calls are added to the call logs as well. 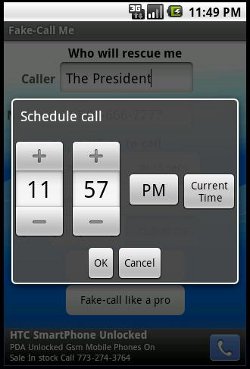 Another key feature is triggering the fake call without even going to the app. You can set pre-defined gestures that ensure the call comes in at a particular time. Just the flick of your hand or the press of a button can trigger the fake call that will bail you out.

So there you have it. An answer to all those situations you’ve been longing to get out of or wished you had something with you to get you out of.

The app is available with an average rating of 4.4 stars and is at a very minimal price for the features It has to offer, so go ahead and click that buy button.