Calling all soccer fans in the house! This one is especially for you guys. Here comes an app that tests you from top to bottom, head to toe and sides as well for all your soccer based knowledge when it comes to the teams you love and which club their logo represents. It is set to get you rolling and check what all you actually know about the teams that you follow and those that you don’t follow in the addictive world of soccer.

Long story short, the Logo Quiz Soccer Club is a test of how well you app know the logos of the clubs playing in majority of the big leagues and countries that support club football. Be it the teams that play the English Premier League, the La Liga, The Federation Cup, etc.

The Logo Quiz Soccer Clubs is an Android app that is somewhat like the 4 pics 1 word app in spirit with the overall look and feel very similar to the former app. Once you get into the app and get on with the game, what happens next is the club logo is presented to you on your screen and you have a list of letters in the grid below you.
Here you are required to type in the club you think it is. The app makes life a bit easier by giving you a few letters that make up the clubs name as hints to make guessing easier at times when the club is not known becomes easy. 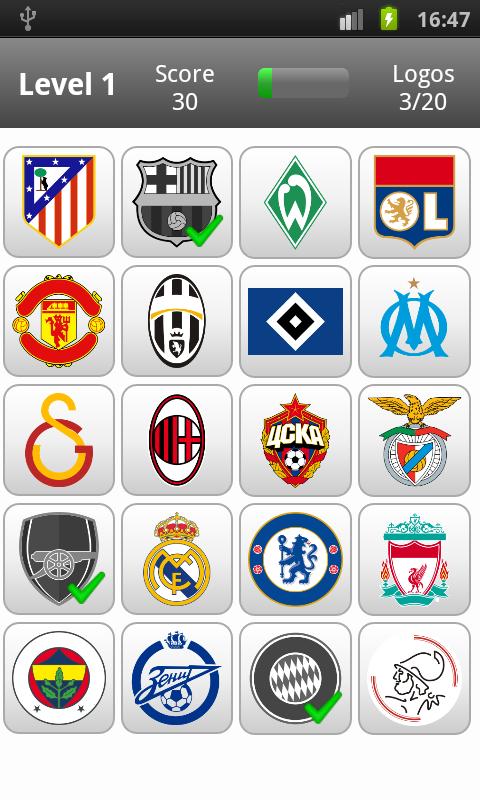 The game of course has various levels to choose from and each progressive level has to be unlocked. The levels are as good as countries and to reach the next country you have to complete the preceding countries clubs to make it through. The levels start from:-

The above levels each have a certain number of answer logos to unlock after which the next level can be proceeded to.
Another cool feature of the app is the hints that it gives you. You can access these hints from the main menu of the app and you can also do so from the play screen when you’re in the middle of a level.

At the end of each level, you will see a list of logos and those that have been correctly answered by you will light up and you can see which logos you hit on the buzzer!
The rest of them will be grayed out unless you answer them correctly.

The hints appear below the logo once you click on it and here you can scroll ahead and backward through the arrow keys available,
The Logo Quiz Soccer Club app also gives you stats so you know how you have fared.

These stats are in terms of the logos guessed, i.e. guessed logos and the points earned for those that were correctly answered, and further to that, also give you the guess tries and the perfect guesses so you know how accurate you were.
Further, you have the ‘Levels Unlocked’ levels that you have cleared and those that you fully completed.

Finally, these stats also give you the number of hints you used and the percentage of the total usage to the available options.

With a solid 4.6 star average rating on Google Play Store, the Logo Quiz Soccer Club app is for all you soccer maniacs out there that are willing to put your passions for the beautiful game to a test.