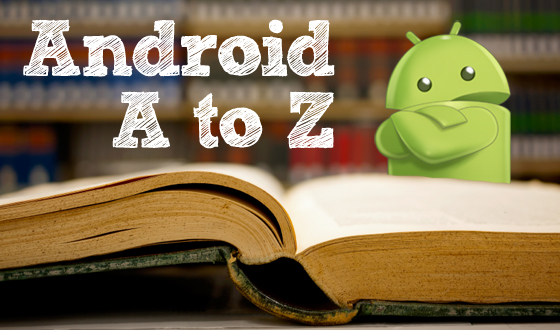 The Oxford Dictionary Of English
The name says it all but it still is our duty to explain to you the level to which an innovative dictionary can play up its features, and features that define an average Dictionary app. It takes its features to a whole another level and does a phenomenal job to ensure that every nuance of the English language has been bundled up inside this ocean of vocabulary goodness that fits in the palm of your hand through a well-integrated Android app.

The Oxford Dictionary of English as an app is fully featured on Google Play Store and extends the usage of a word to the point of completeness where no stone is left unturned. This being said it covers so many parts of the single word that you will end up knowing the top to bottom of the word with multiple uses in different contexts.
The app interface is sleek and extremely easy to navigate and understand this making the learning curve as straight as ever.
With a plain white and black interface, the main pages within the app are the following: 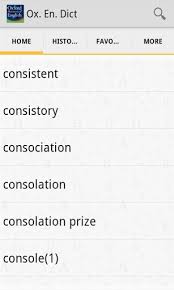 These to a large extent sum up the Oxford Dictionary app but there’s a lot within this to make the app look and feel nice at the same time add utility to it.
The left of the screen on a tablet will show the list of words above and below the searched word and at the same time highlight the word that you looked for and all of this will be happening to the left of your screen.

Right of your screen is where all the actual search action takes place.
Here the huge list of meanings of the word appears the detailed part of speech with a detailed meaning exists. It includes historic meaning and present day interpretations of the word.
This word meaning is given further context for your better understanding by following it up with phrases where the word has been used in so that you know how to use the word in a sentence. 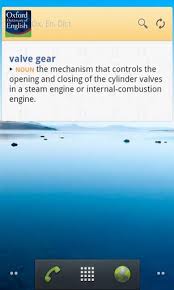 You can also pronounce the word through the speaker option to the right of the word.
Further, you have derivations of the word right at the bottom and and derivatives of the word too.
The Oxford Dictionary of English app gives you 4 more features within the word search too which is the demarcation line between this app and the others.
The stand-out features include:
• No Filter
• Fuzzy
• Key Word
• Wildcard

Within phrasal words the ‘key word’ tool will detect the word and present to you the meaning of the word looked for.
A wild card will simply replace a one or more words from the letter to create a different word all together.
This is a good way of playing around with words and landing up on different words.
Save words as your favorite too for later use.

That’s the Oxford Dictionary for you. With over 350,000 words you’re set to have a linguistic treat and ensure you never have to be a victim to the Grammar Nazis! 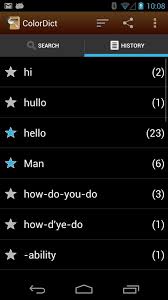 From the makers of and ColorNote; the application that helps you take down notes for your daily requirements, here comes another app that is an all integrated app for the average English speaker. Not only that, the app extends its usability to not only the conventional but also the ardent and avid reader that helps you know anything and everything about the word.

Pitted up against apps such as Oxford Dictionary and Merriam Webster, the makers of ColorDict dictionary have to a large extent taken a chance with such an app, in a market saturated with market leaders. What it does do on the other hand is that it provides features that not even the leaking market apps for dictionaries offers.
The makers of the app, called Notes have taken from the name where you can change the colour of the app as you use it and as per what you like it to do.

The basic search feature is integrated into the app where all you have to do is add in the word that you are looking for and voila!
The top of the screen has the ColorDict name flashing at the top with the options menu right there so that you can drop it down to access multiple arenas of the app.
Below that is two options that help you make a search, and then use the history right from the main search screen.
The word meaning appears in the space below the word. It will tell you the part of speech of the meaning and will do the same for each respective meaning of the word.
Below that the Thesaurus system integrated into the app will get you to see more synonyms of the word right below each respective meaning.
It then also gives you an alternate set of meaning not from the dictionary but from the whole web.

In the middle of all this, you can also listen to the American and British pronunciation of the word. 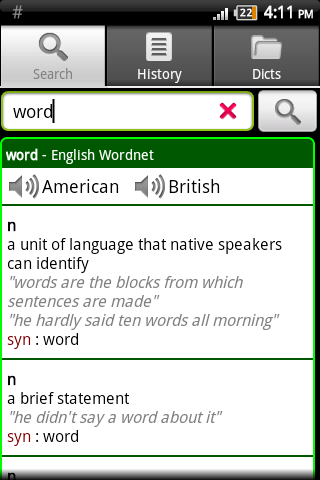 The history tab will give you all the words you have typed in the list so far in a list view and can be marked as a star from there directly.
The app also integrates the ability to share your searches across different apps on your Andorid device.
The text to speech feature helps you convert words to vocally pronounced words.
The ColorDict app has a voice recognition feature and also supports the volume keys scroll which will help you look between words.
Further the app supports readers like:
• FBReader
• Moon+ Reader
• Cool Reader
• ezPDF Reader

You should know that the ColorDict app also supports Google Translate and Google Dictionary to get all the more meanings of words that you are looking for.
And if you think that wasn’t enough the app helps you translate languages from English, Japanese, Czech, German, French, Chinese, Italian, Spanish, Korean, Russian, Dutch, and many other languages.

The Wikipedia encyclopedia is also included in the app so that you have a holistic word finder and meaning giver all in one app.
So ColorDict as an Android app will help you get the root of the word and the meaning of it through the eyes of the internet too. It is one of the most useful educational allies to have in your pocket at crucial moments. So get it from Google Play Store today for free and become a linguistic pro!