How many times have you been in the middle of a movie and have been disturbed by the pesky call of nature. You can’t move because others around you will have a go at you. You can get up because the movie is such a nail biter and you don’t want to miss out on anything important that happened. You also can’t get up because then you’ll lose track and flow of the movie. So what do you do? You can’t read about the movie at first as that’ll just ruin it for you. If you read about it you’d know when you could leave for a quick pee but then goes the plot down the drain. If only there was something that would tell you what the most appropriate time to go for a pee in the middle of the movie was.

Well, now there is. Run Pee does exactly that for you as it updates itself with all the latest movies through its interface and developed algorithms. Ladies and gentlemen, this is as niche as niche apps can get; however, it is a surprisingly useful contender in a genre where the word “utility” is taken for granted. 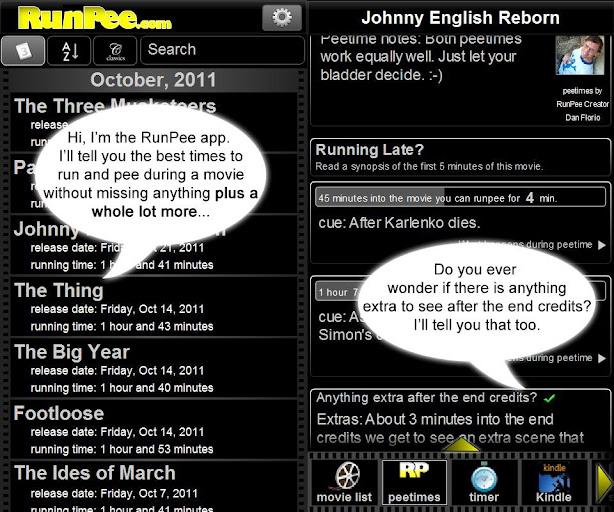 Any movie that hits the theaters is added to the app on the day of release and sometimes even before that. It then adds in a database of all the movies and you can search for it in the list.

Just like IMDB you know all about the movie, the date of release, the time it runs for and here’s the best part, the time intervals it has where you can go for a pee break.

That’s right, highlighting the apps core feature, you can be in the know of when the trivial parts of the movie are going to come for you to dash out and come back and no one even has to know.

Each movie has a timer. Once you open up the Run Pee app and tell it what particular movie you are going for, it will automatically start its timer. The app tells you through a vibration a few minutes before the pee break so that you are set to go for it.

It also has an in built timer when the break is on and to give you the feel of the break it has a picture of a pot and someone peeing in it through a virtual view with a timer on the screen. 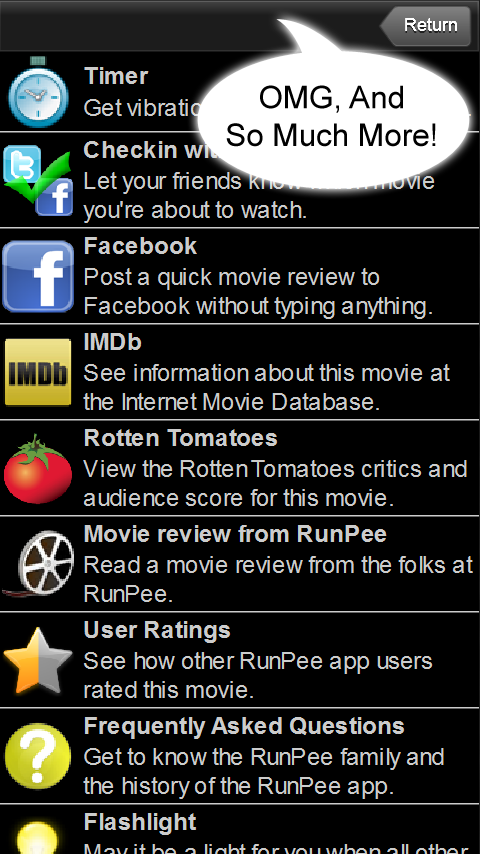 This gives you a direct idea of the moment and you can hurry up.

Another cool part is that a list appears before you start to watch the movie and this gives you specific times so that you can pre- prepare. Not only that, many a times you wait for the movie to end in order to see if there’s something special for you after the credits. Run Pee even tells you that so that your wait after the movie is worthwhile.

In fact, there have been many times when you have reached in late for a movie and thus missed the entire crux of the film. Run Pee even gives you what happened in the 1st 3 minutes of the movie so that you enjoy the rest of it.

Finally, the interface is designed as such that nobody around and disturbed and everyone enjoys it in peace and quietness.

So the next time you want to go pee and are at the movies you know exactly what to do.