Conventional forms of word games came with a large number of single letters placed one after the other in a square or rectangular grid and you were asked to find words within it. They consisted of a few letters scrambled and an anagram was supposed to be the key t the right word. Word games came with letters spread across and words were to be formed using those letters only.

Word games in short had many variations but never like this. Enter Ruzzle – a word game for your Android device that came in and changed the face of word games. It is often referred to as the new ‘Angry Birds phenomenon’ by critics and users along with Subway Surfer. So let us take a deeper look into what makes this worldwide puzzle world phenomenon such a marvelous creation.

The principle gameplay concept for Ruzzle is rather unique and actually operates as an amalgamation of the best features from various word games. It is optimized for touchscreen devices in a way to maximize the interactivity and enjoyment you get from the game.

Mastering the Rules of Ruzzle

It’s simple! Set yourself against the two minute timer and make as many words as you can. 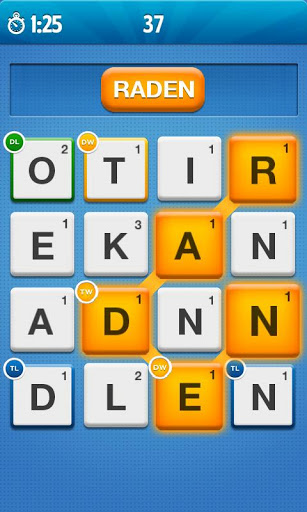 The grid is available on your screen and words to make can range in hundreds. So what’s the catch?

You have to swipe your fingers across the screen through each letter to make a coherent word. Make as many words and the game crown is your yours. But the words must be within the purview of a single swipe.

There are double word and triple words to be made. These double letter and triple letter words help to increase your scoring so using these obviously gives you a considerable advantage.

The game is fun and addictive and it’s hard to let go once you have got the hang of it and have started making a good score.

Initially, you can play a single round in practice mode to see where you stand and practice till you feel you are up for the game.

Challenge your friends to a game of Ruzzle. They don’t even have to be with you as long as you are connected to them through the app online.

The game is set in 3 runs of two minutes each.

After each round, you are given the stats of the score, the number of words made, the total points and the words missed.

This can be seen for you and for your opponent on the same screen.

The player with the higher score at the end of three rounds is the winner. The secret is to strategically use the blocked letters with extra points to make words in order to attain the highest score possible. 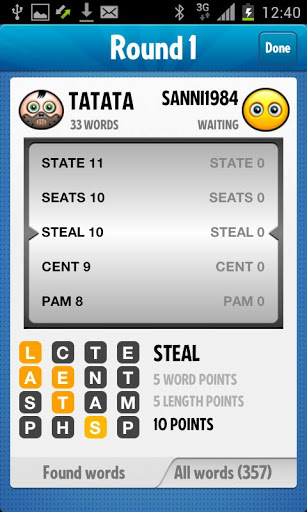 Another great feature is the random player selection option. If your friends are unavailable you can start a new game with a player unknown online. This always entails the element of surprise and you don’t know how good your opponent is, encouraging you to want to give your best effort every single game.

Ruzzle can be played in languages like English, French, German, Spanish, Italian, Danish and a few more.

You can check out the Global ranking list at www.ruzzle-game.com too and see how well your vocab skills and quick thinking matches up with players across the world.

As an intuitive and heartbeat thumping game, Ruzzle is definitely the way ahead for the new generation of interactive word games that tests your wits and never compromises on the thrills to enjoy while doing it.