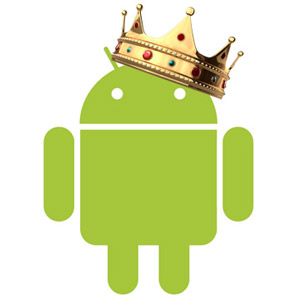 Google continues to hold on to its unassailable lead. As per Strategy Analytics, a research firm that tracked the third quarter shipment volumes globally, Google dominated the market with more than 83% of the smart phones running on Android. The number of 268 million smart phones this year shows a remarkable growth over last year’s figure of 206 million shipments and is further testimony to the growing popularity of Google Android.

Android Advantages – Too Overpowering For Others To Emulate

Google has been able to deliver an unbeatable combination of low cost handsets along with services and extremely user friendly software through Android. That has made it attractive to hardware manufacturers, consumers and operators, not to mention developers of apps. Apple and Microsoft have not been able to replicate this success story as of now. Apple is still considered far too expensive despite the superior quality of hardware they provide and Microsoft is struggling with its Windows acquisition.

Microsoft has been able to sell only 10.5 million from 10.3 million last year and its market share has dropped to a mere 3.3% from 4.1% last year. The declining market share is due to the fact that it is not seen to be a major player in the Chinese, Indian and Japanese markets. These are the markets where Android has been able to make a sufficient dent and establish a commanding presence over the last couple of years.

Apple has finished the 3rd quarter with just 39.3 million shipments and though it is more than the 33 million as of last year, the market share has not improved but declined from 13.4% to 12.3%. It is clear that many of the current Android users who otherwise might have purchased the Apple iOS have not done so due to the pricing issue and also because Apple has been slow to come out with bigger screen displays. Android on the other hand is now available with screen sizes at more than 4.5 inches and above and has been for some time. The introduction of the iPhone 6 and 6 Plus recently will take some time to bear fruit for Apple as the devices have seen introductions in countries on a staggered basis. It will be only by this yearend that Apple would be selling the iPhone 6 in over 110 countries.

Blackberry was another brand that threatened to pose a challenge to Android. However, it too has seen its market share inching downwards to just 0.7% from more than 1% last year. It is trying desperately to stay relevant in this market by introducing models like the BlackBerry Passport as well as the BlackBerry Classic but will find the going tough to hold on to its market share.

However, the challenges now faced by Google though are different and they relate to falling prices, many brands competing for space and its responsibility to ensure everybody makes decent money. The positive aspect for it is the growing smart phone and other devices market for Android.