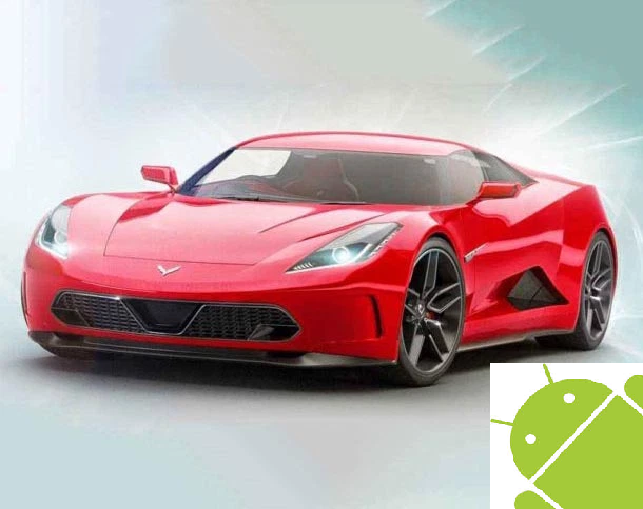 Chevrolet recently unveils the 2020 Corvette, an entirely new car rebuilt from the ground up —storied sports car with decades of history — makes a generational leap for 2020 by moving the engine from the front to the middle. This will help it better compete with other mid-engined supercars.

The Corvette’s massive V8 engine isn’t the only thing pushing the car forward: Chevy upgraded the Vette with tons of tech, including Android Auto, to future proof the experience for years to come. An 8-inch color touch screen – based on Google’s Android – allows drivers to control nearly every facet of the car.

…near the volume knob and the phone will automatically pair with and connect to the car. Support for AT&T’s LTE 4G network is included, though a data subscription will carry a monthly fee. The Corvette has a built-in Wi-Fi hotspot and can accept software updates over-the-air.

There is a1080p video camera that captures driving experiences and a performance data recorder that measures metrics, including start and stop times on various tracks around the world. Drivers can select from 12 different parameters to create their own driving modes, all of which are accessible with the touch of a button.

The instrument panel is a customizable 12-inch screen that works in concert with a heads-up display that includes a 3D enhanced navigation, backed up by Android. Additionally, Chevy tapped Bose for the 14-speaker sound system, which immerses the driver in their favorite tracks.

The Corvette has long been a V8-powered, rear-wheel-drive beast, however, according to Chevrolet executives, the company had pushed performance as far as it could go in that configuration. Chevy knew it needed to take a radical new approach to improve power, speed, and driving dynamics. Drawing from years of racing-inspired research in mid-engine designs, the 2020 Corvette adopts the mid-engine placement and launches a new era for the brand.

The car has a 6.2L LT2 V8 power plant, which makes 495hp and 470lb-ft of torque. Talk about power, it is capable of rocketing from 0-60mph in under three seconds. That’s on par with Ferraris, Lamborghinis, and Porsches, all of which cost tens of thousands of dollars more.

It also has a new dual-clutch, 8-speed automatic that Chevy says shifts faster than any human could throw the gear selector. Thanks to the mid-engine design, the cabin is pushed 16.5 inches forward. This allowed Chevy to shorten the steering column and lower the cowl, which provides the driver with a much more direct view of and feel for the road. The Corvette’s center of mass is now placed at the driver’s right hip, almost directly in the center of the car, which dramatically improves feedback for the driver, who has a more direct connection with the pavement.

The better news is, the Chevrolet 2020 Corvette is now available for pre-order. This futuristic, Android-merged car starts at less than $60,000. The company is offering more exterior and interior color options than ever before. If you buy now, you can even configure the 2020 Corvette according to your liking. It’ll be quite an accessory for your phone.