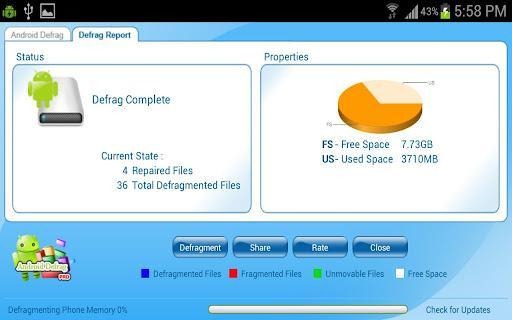 As many Windows users know, defragmenting a hard drive can lead to a boost in speed and performance. Defragmenting takes all of the fragmented files on your hard drive and moves them closer together to ensure that they can be found as quickly as possible.

Some app programmers have decided to bring defragmentation tools to the Android community. But does defragmenting Android actually do anything? Or is it just an over-hyped way to speed up your device?

The truth is: defragmenting your hard drive can actually do more harm than good. Androids use solid state drives, which operate in a different way than traditional mechanical drives. Unlike the hard drives you might find in your computer, Android storage devices use no moving parts – SSDs operate through the use of integrated circuits as opposed to rewritable disk drives.

Why does defragmenting Android harm my system?

SSDs automatically manage data placement. They don’t need to be defragmented on a regular basis because the files are always in their most optimum location. In fact, when you defragment an SSD, it shortens the lifespan of that drive. All SSDs have a finite lifespan due to their integrated circuitry (don’t worry, this lifespan is generally over 50 years long). When you defragment that hard drive on a regular basis, you’re putting undue stress on the drive and chopping down its lifespan.

You see, when you defragment a hard drive, you’re not just overwriting the data (which is what happens on an ordinary hard drive). Instead, you’re forcing the drive to erase and write that data over again. Since each sector of the drive can only be erased and written over a finite number of times, each defragmentation scan hurts your Android a little more.

If all of that went over your head, then here’s the main point we’re trying to get at: Android defragmentation apps like this are nothing more than scams. Your Android doesn’t need them and they won’t speed up your tablet or smartphone in any way, shape, or form.

If you’re looking for a real way to speed up your Android, try rooting it and downloading a custom ROM.