This past week, the Android community is in an uproar against two tech review websites: CNET and The Verge. Both review websites have given the iPhone 6 enormously positive reviews.

There’s nothing wrong with that.

But here’s the problem: while they knocked Android smartphones for having bigger screens, they drooled over the iPhone 6 and iPhone 6 Plus.

How can the iPhone 6 Plus be the perfect size while the Note 3 is “absurdly big”? Well, we’re breaking down the story here today:

Why people are calling The Verge biased

Soon after the iPhone 6 was announced, The Verge posted their iPhone 6 Plus Hands On video. In that video, an employee says the following quote:

“It feels pretty massive, but it doesn’t feel so massive that it’s completely unwieldy.”

The quote (which appears 15 seconds into that video linked above) quickly made the rounds on social media as the following image: 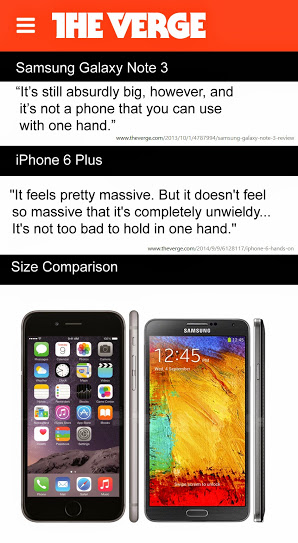 Bias, right?! Here’s what we know.

-The Note 3 has a 5.7-inch screen and the iPhone 6 Plus has a 5.5-inch screen. Were those .2 inches really enough to make a tech pro from The Verge have two completely different opinions about the iPhone and Galaxy Note 3?

-The Galaxy Note 3 is 8.3mm thin and the iPhone 6 Plus is 7.1mm thin. Is that extra millimeter noticeable? It might be. Or it might be a case of Apple bias. 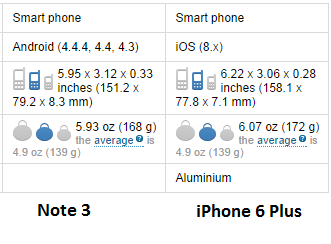 Why it’s not bias

-Because immediately after giving the quote above, that same analyst says “it’s pretty narrow, so compared to really giant Android phones, it’s not so bad to hold in one hand.” So he immediately admits that he’s taking Android phones into consideration with this comparison.

-Because when the specs are measured individually, they don’t seem all that different. But when you consider that the Note 3 has a .2 inch larger screen, a 1mm thicker frame, and a 1mm wider frame, those specs might add up to a noticeably larger device.

Furthermore, The Verge also writes articles like this, where they call out Apple for hiding an “embarrassing” camera bump problem. In marketing promo materials, Apple shows off the iPhone as a perfectly flat device when in reality, there’s a relatively large camera bump over the lens.

Ultimately, here’s how The Verge reviewed the iPhone 6 Plus and the Samsung Galaxy Note 3: 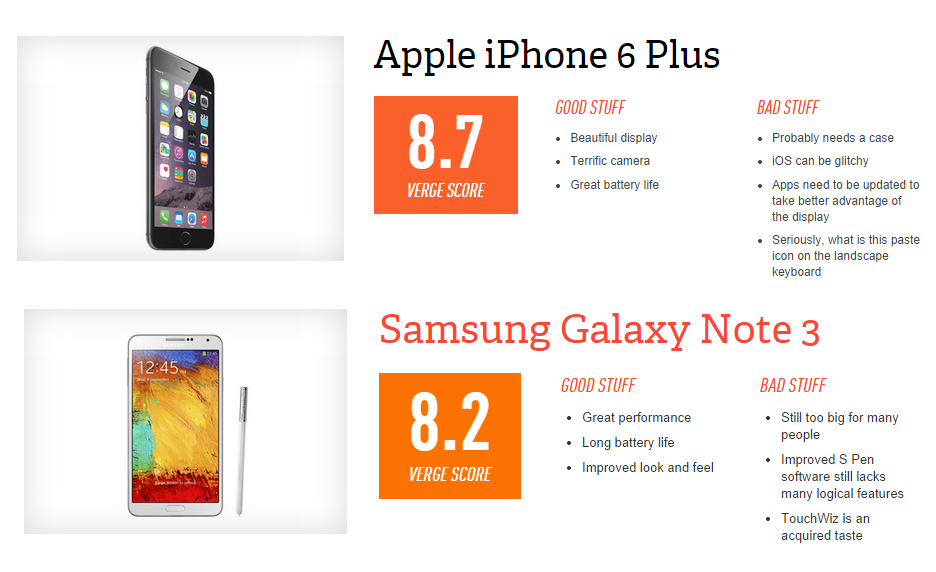 Why people are calling CNET biased

CNET is being accused of bias for very similar reasons to The Verge. Check out how the reviews differ between the Galaxy Alpha and the iPhone 6:

CNET on the Galaxy Alpha (1280×720 resolution, £450): “Its low-resolution display is a big letdown, though, especially when you consider the high price of the phone.”

Additionally, CNET only posts the most favorable Apple comparisons when it comes to tech specs. In their iPhone 6 review, CNET praised the iPhone 6 for its magnificent performance in Sunspider, Linpack Multithread, and GeekBench 3 while displaying graphs like this:

Meanwhile, in their Galaxy S5 review, CNET did not mention Sunspider, Linpack, or GeekBench stats at all. Instead, they used a totally different set of benchmarks, creatively called “Graphics Test 1”, “Graphics Test 2”, and “Physics Test”:

Mobile benchmarks, of course, aren’t even a good comparison tool no matter which standards you’re using. Samsung and Apple have both been accused of manipulating benchmark tests (although Samsung claims that practice stopped with the Note 3 and Galaxy S5).

Meanwhile, the iPhone 6 has a dual-core processor while many modern Androids use quad-core processors. You can’t really compare two processors head-to-head (not to mention two different OSes) and get reliable, significant results.

CNET accused of being biased towards Windows Phone

CNET has also been accused of unfairly criticizing Windows Phone handsets while displaying overt iPhone favoritism. WPCentral did a good (and mostly unbiased) write-up on that issue here.

I won’t get into that issue in too much detail, but they were basically accused of throwing the Lumia 1020 “under the bus” while also getting significant camera specs (like shutter speed and photo processing power) confused or totally wrong.

The most damning criticism of CNET’s bias came in January 2013 when CNET was banned from selecting the “Best of CES 2013” awards because it demonstrated considerable bias towards a certain product.

After an investigation, it was revealed that CNET’s parent company, CBS, allegedly told CNET not to award the “Best of CES” award to a product called the Dish Hopper because CBS – and many other TV networks – were actively trying to block the technology from the marketplace. 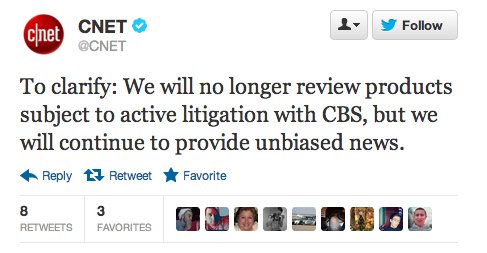 As a result of the CES 2013 scandal, one CNET editor resigned and CES dissolved CNET’s involvement in the annual awards program. Eventually, the Dish Hopper was awarded its rightful “Best of CES” title.

Are CBS editors still influencing CNET rankings today? If history repeats itself, then that could certainly be the case. At any rate, CNET is no longer choosing awards at CES events. 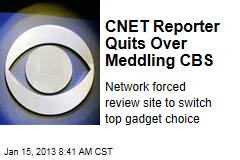 Conclusion: Are CNET and The Verge biased?

The Verge has been called iVerge in the past. A lot. That term seems to trend on Twitter after every positive review The Verge gives to Apple products.

CNET, meanwhile, has also been accused of Apple favoritism after every positive review it gives to Apple devices.

The truth is: no review website is totally unbiased. The Verge has been accused of being biased numerous times. CNET, however, has actually been proven to let its parent company make significant editorial decisions on its behalf.

Long story short: I think The Verge is being unfairly criticized for a perceived pro-Apple bias when that bias doesn’t actually exist. CNET, however, has a history of bias. I’ll let you decide who’s to blame.