There have been quite a number of scanning apps that have been launched for our convenience. From the weather to GPS, everything has its own app; and not one, several of them. Although there are not too many of us who fancy scanning everything but those who do might get frustrated by your phone’s performance after downloading all these apps. The resulting performance would be slow because scanning apps will definitely not be the only ones.

Thus, there is an app that contains all scanners so that you do not have to download 6 odd apps just to scan things. The best part – its scientific appearance. This wonderful app is called Scientific Sci-Fi Scanner Lite. It is a highly interactive multi-sensor and data visualization scanner with a sci-fi look and feel. This scanner has 9 modules: Solar, Geo, Weather, Audio, Gyro, Mag, GPS, Cam, and Device, three of which are free and all of which have full HD graphics. 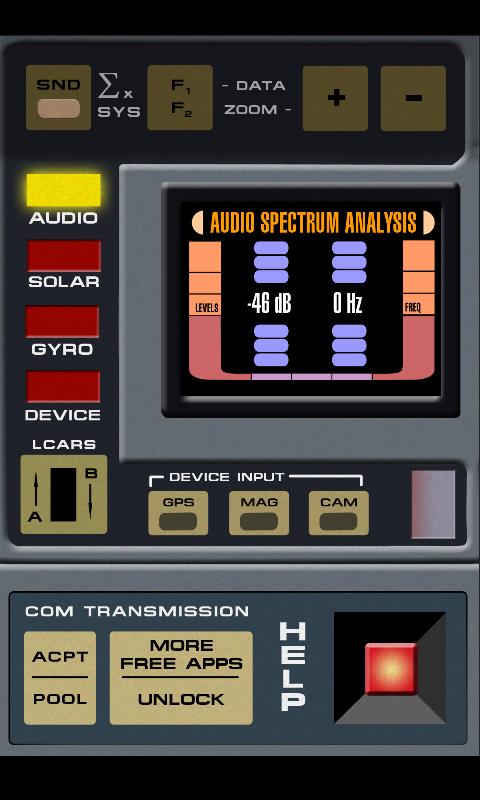 Here is a little bit more about the modules this app offers:

SOLAR MODULE
Graphs the last 96 hours of solar wind plasma readings from the US ACE satellite and displays the most recent Solar X-ray. Measured parameters are Proton Density, Bulk Speed, and Ion Temperature.

AUDIO MODULE (requires low-latency hardware, experimental)
Displays a spectrum readout of the microphone’s audio, as well as current dB levels and Hz frequency. Some Android phones lag or crash on this feature (those without low-latency audio or with lots of background services running).

GPS MODULE (free)
Displays WGS84-corrected coordinates on a 3D globe based on NASA satellite images. Zooms and rotates. Also displays readout of latitude, longitude, and altitude values and has a working compass.

QUALITY BUTTON
Adds screen FX to simulate a CRT monitor. The noise and chromatic aberration effect tax the GPU, so “high Q” may not work on all phones.

Scientific Sci-Fi Scanner Lite is very exciting because it provides you with extensive scanning facilities without the cumbersome hassles of using an actual scanner and saving considerable time in the process.

The devices that it has been verified on are:

Let us download this app and scan anything and everything that we want to because all we need to do is download one app to enjoy the facilities of several scanning apps!